Wow! I slept until 5am today. We are going to tour a village and go to a calligraphy museum today. We may get to see an orphanage too.

Our plans changed today because of a big storm. We are stuck in the hotel for a few hours. Abby has been playing in the hall with a new friend, Celia. She is also a Gong baby, 16 months old, conservative, same size, and pretty reserved. They met in the hall and started laughing and chasing each other. Our rooms are directly across from each other, so we both opened our doors and watched the girls run from room to room. It was so cute. They played for about 20 minutes. 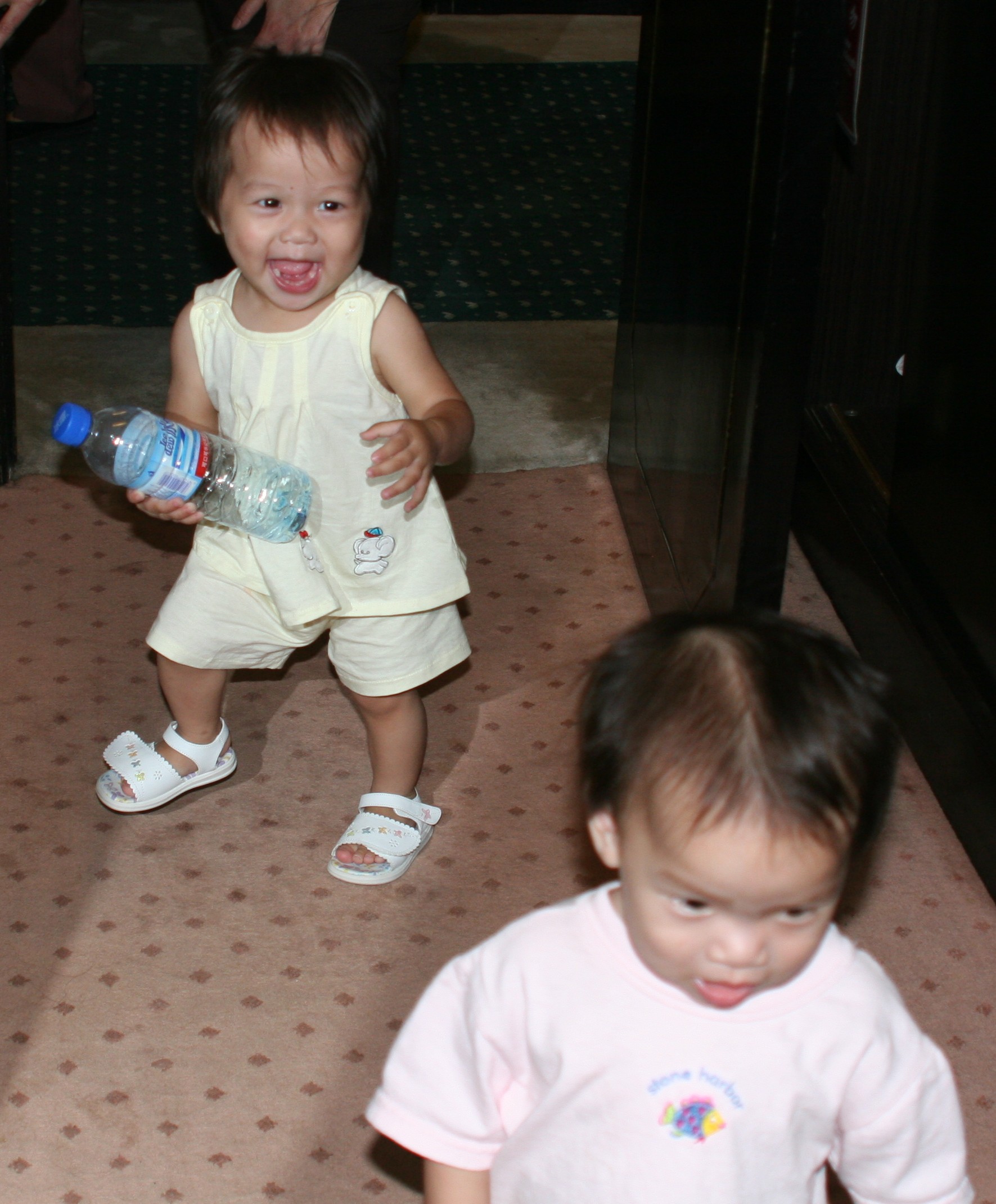 After playtime, Abby needed a break, so she crashed on the couch and started holding her own bottle. YEAH!!!

She even tried to get fancy. She likes to carry around a water bottle. 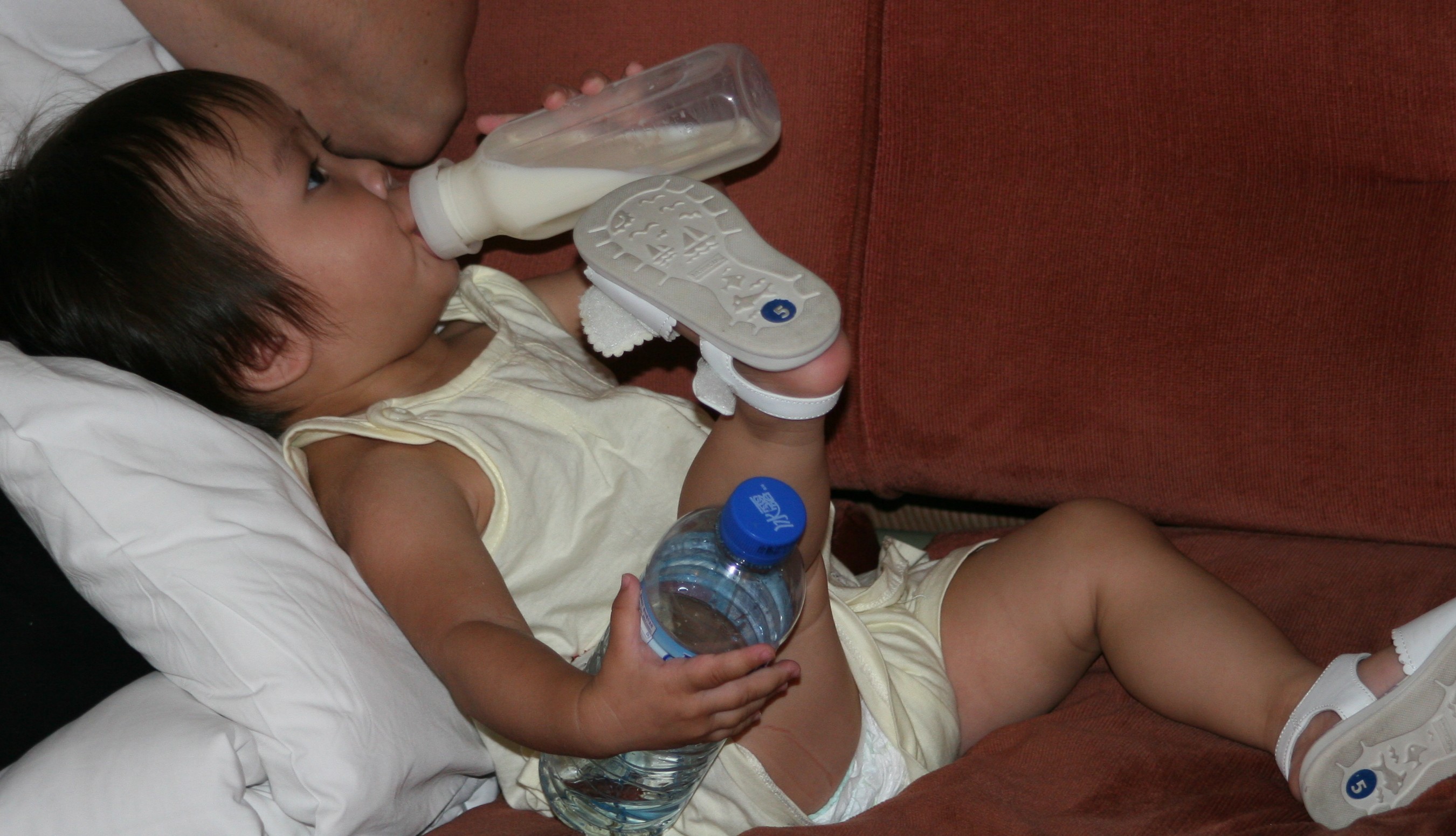 We did not get to go to the village today. It rained all day. This is the rainy season.

About 80% of China's population live in the country. Many believe that our daughters would live in villages in the country had we not come for them. I was looking forward to the visit.

Lunch was pretty good. We went to a French restaurant. We had soup, beef, potatoes, ice cream - YUM YUM.

Abby sat in a big chair all by herself. She wants to use a spoon.

We have learned so much history and culture this week. I love our tour guide, Jenni.

Several US presidents have visited Guilin including Nixon, Carter, Bush Sr, and Clinton. When Nixon came in 1972, the city was so poor that it did not have cars for him and his entourage. Guilin borrowed 10 cars from Beijing. They are very proud of their city's beauty and very concerned about its reputation. Just days before Clinton was to visit, the city flooded and brought lots of debris to the streets and along the shore of the Li River (where we took our boat trip). The government wanted to cancel Clinton's trip because they did not want him to see their city looking so dirty. Instead thousands of volunteers came out to clean the streets and the miles of shoreline. It was the cleanest the city had ever been. Clinton was very impressed. The city is still very clean today.

We also learned many customs concerning marriage, weddings, having a baby, family order, naming....... It is very interesting. Very different from US.

We did go to an art/calligraphy museum in the afternoon. There was some pretty cool stuff there. Check out this New York fish.

You can tell he's from NY because of the beer bottle in his mouth.

One of the artists did all the kids' names in Chinese calligraphy on rice paper - what a cool souvenir.

Since it was raining, the restaurant, hotel, and museum staff came out to our bus with umbrellas and walked each baby into the building.

Every time that we get on the bus, De takes attendance by family. Then he says "ma won kee" (no problem/no worries) and we repeat it. Every single time, Abby gets a huge smile. If I just say it to her, I get nothing. It's funny.

Abby has been playing ball for a long time this evening. We are trying to wear her out. She is not a good sleeper. I think she is very insecure that we might be gone when she wakes up. She and daddy are playing tickle. She is cracking up. Stephie is watching a show out the window.

Abby never asks for anything - not even food. She knows "no", "get me", "ball", "bite", her name sometimes, shaking your head no, and our names. She is even starting to make up games. She goes to Stephanie a lot better now, but she still will not go to Dad. He feeds her, makes her laugh, plays with her, and rocks her to sleep, but she is still unsure of him.

Abby is a good eater. She tries most everything, but is very picky about her drinks. I think she has gained a few pounds this week.

Dinner was at our hotel - Chinese family style restaurant - no serving spoons. What's up with these people? Fancy restaurant - share germs with strangers. I woke up with an ear ache today. Oh no. Now I have a sore throat. Several people aren't feeling too hot today. Steph has a heat rash. Al has a sunburn. Abby may have a fever. Monday should be interesting......

Abby is still wide awake. She seems to be a night person. Three to one - I'm in trouble.