A New Hotel; A New City

We had to get up at 4:30 this morning to eat and get on the bus. There is only 1 flight each day from Guilin to Guangzhou.

The airport was interesting.......De purchased all of our tickets for us - 38 I believe, and then handed them out just before we went through security. Some of us were looking at our tickets and noticed that none of the names on the tickets matched anyone's name in our family. When we tried to look around and trade, De just said 'Don't worry about it; it doesn't matter.' He was right. We walked right through security with no ID and someone else's boarding pass. We didn't take our shoes off and no babies had to get out of their strollers. We're not in America any more....

We're in Guangzhou today at the White Swan Hotel. This is the final leg of our long journey. It's hard to believe that it was more than a year and a half ago that we started considering adopting from China, and now here we are. It has been more than a week since we met Abby and fell in love. She has a beautiful smile and bright eyes. Everyone who meets her thinks she's awesome. 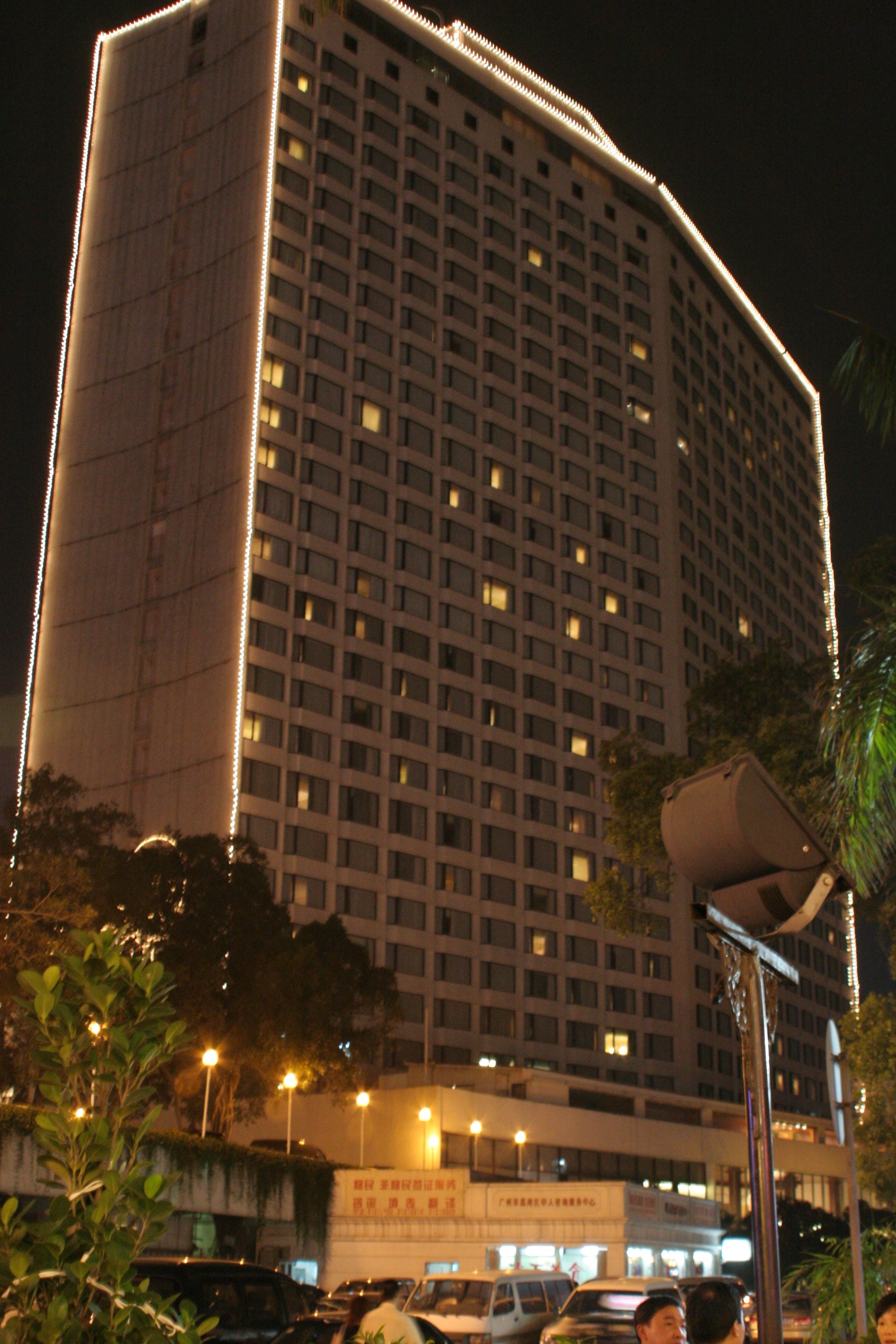 Our hotel has some really cool art work. It is all for sale for tens of thousands of dollars - so we just took pictures. 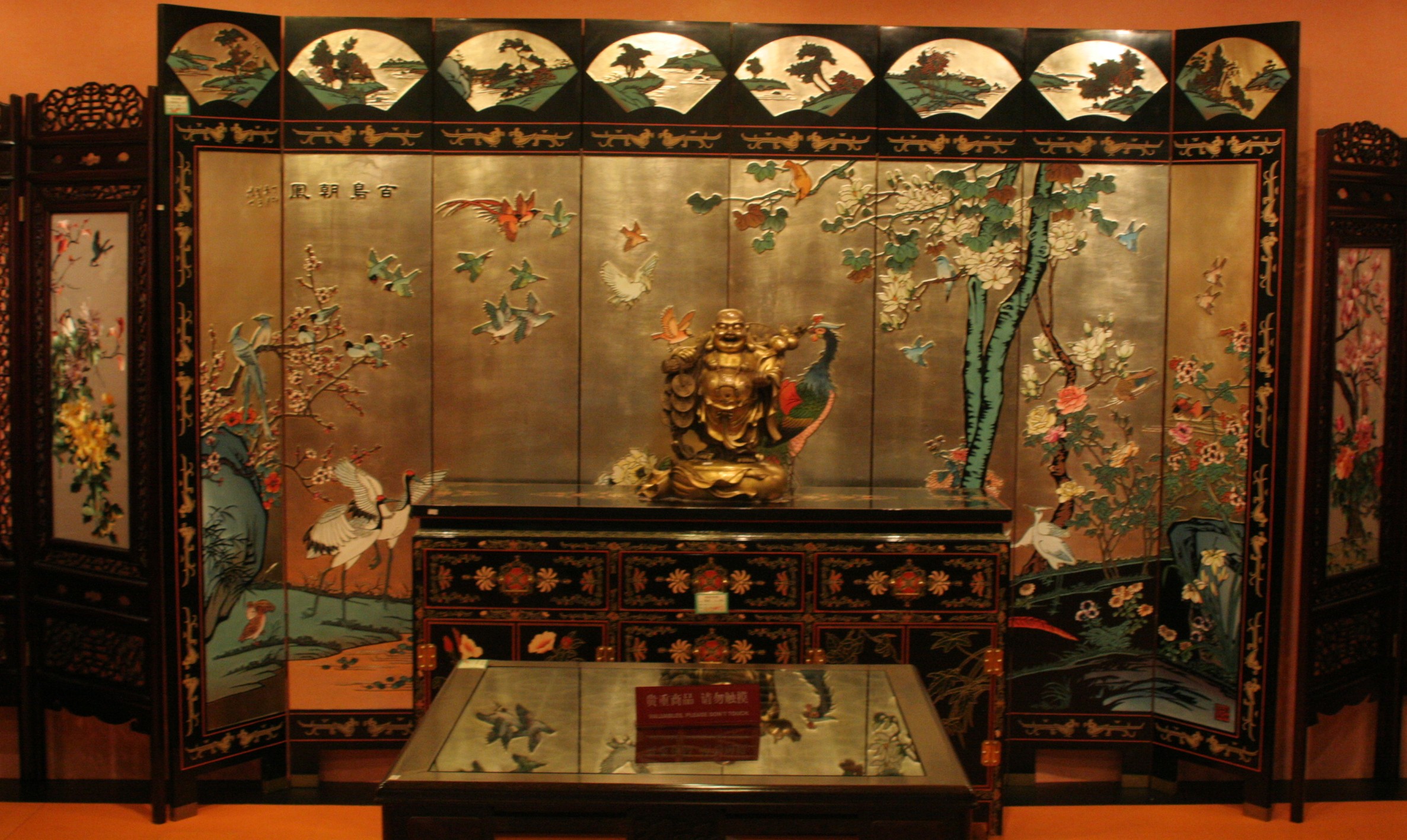 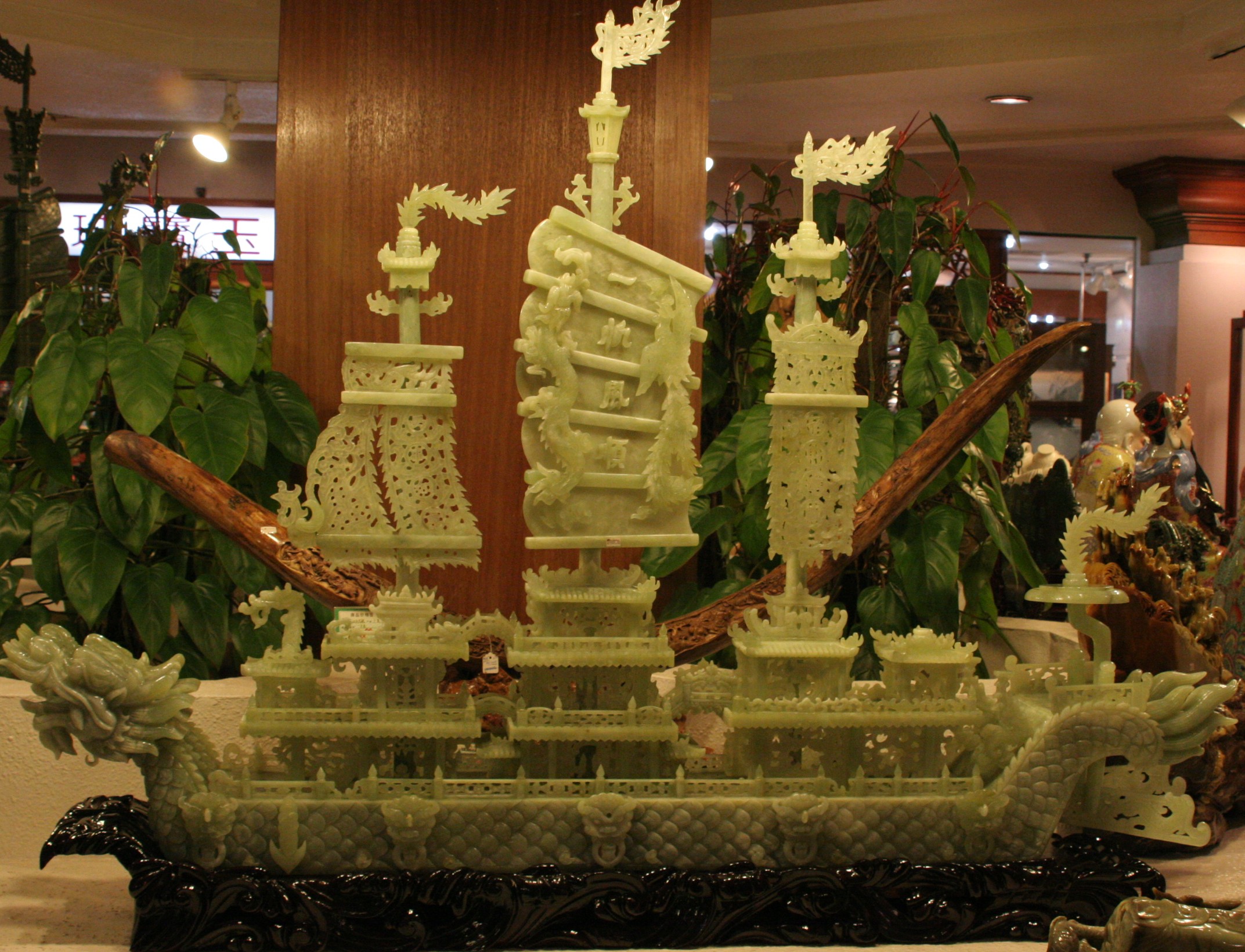 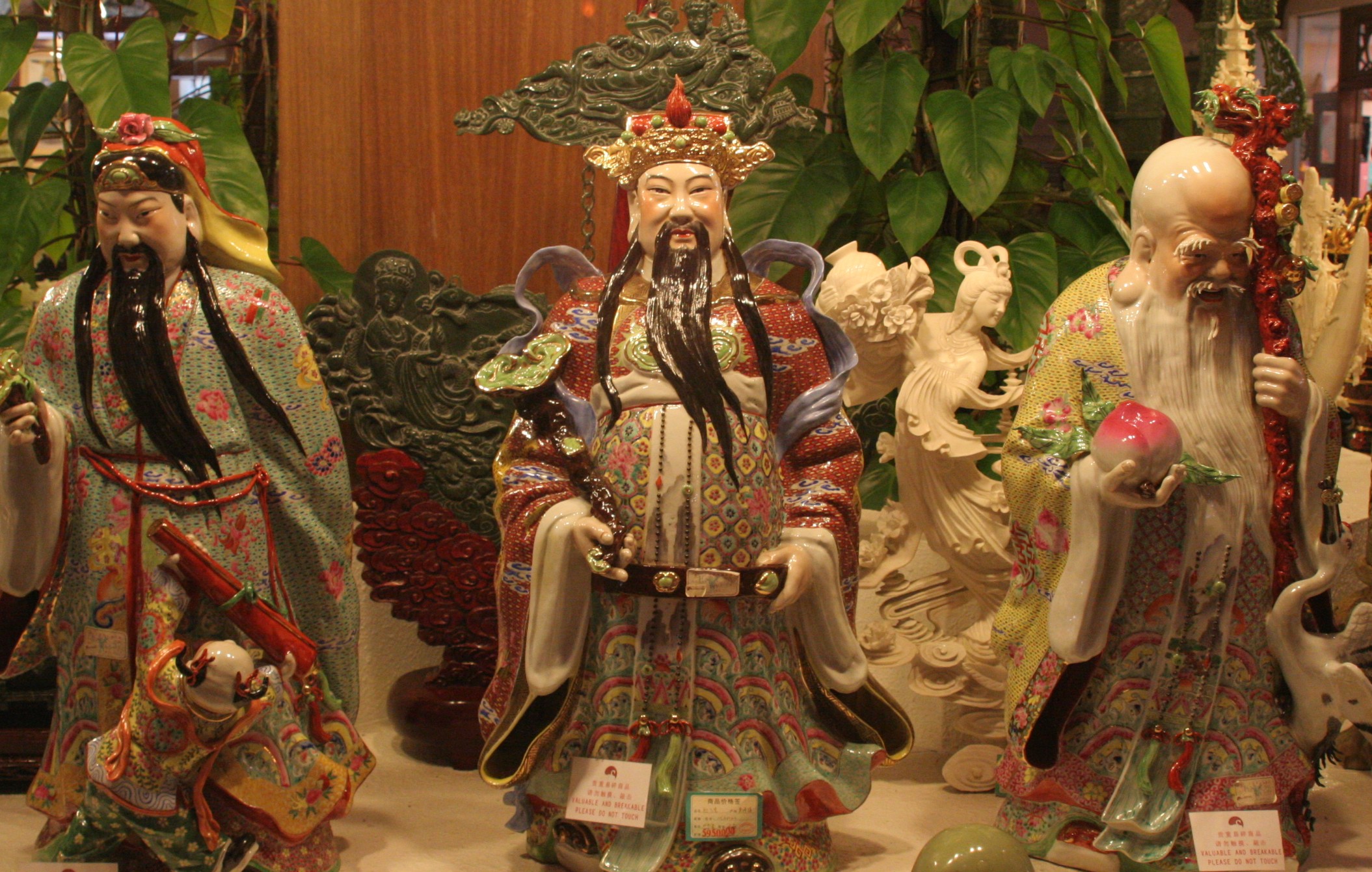 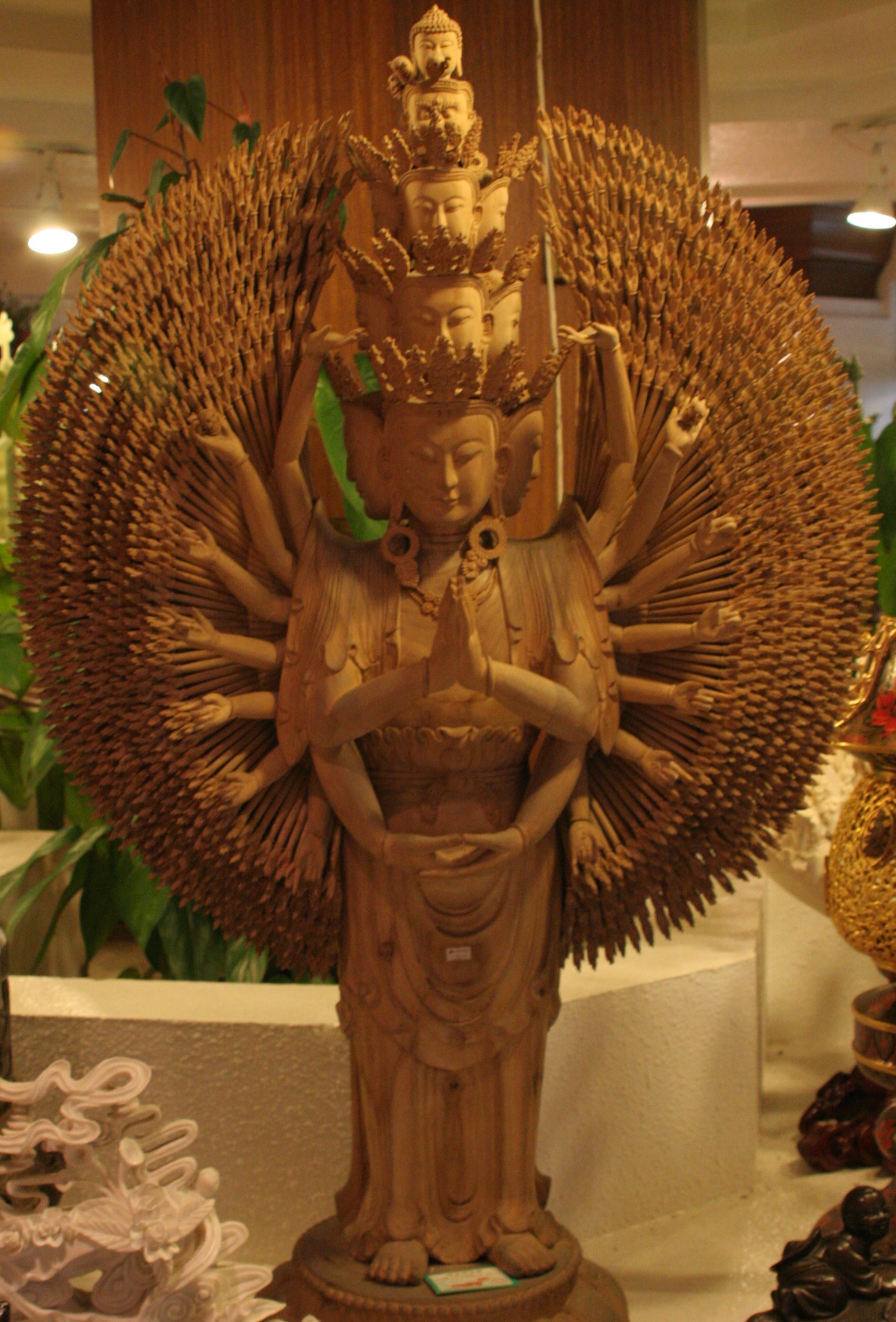 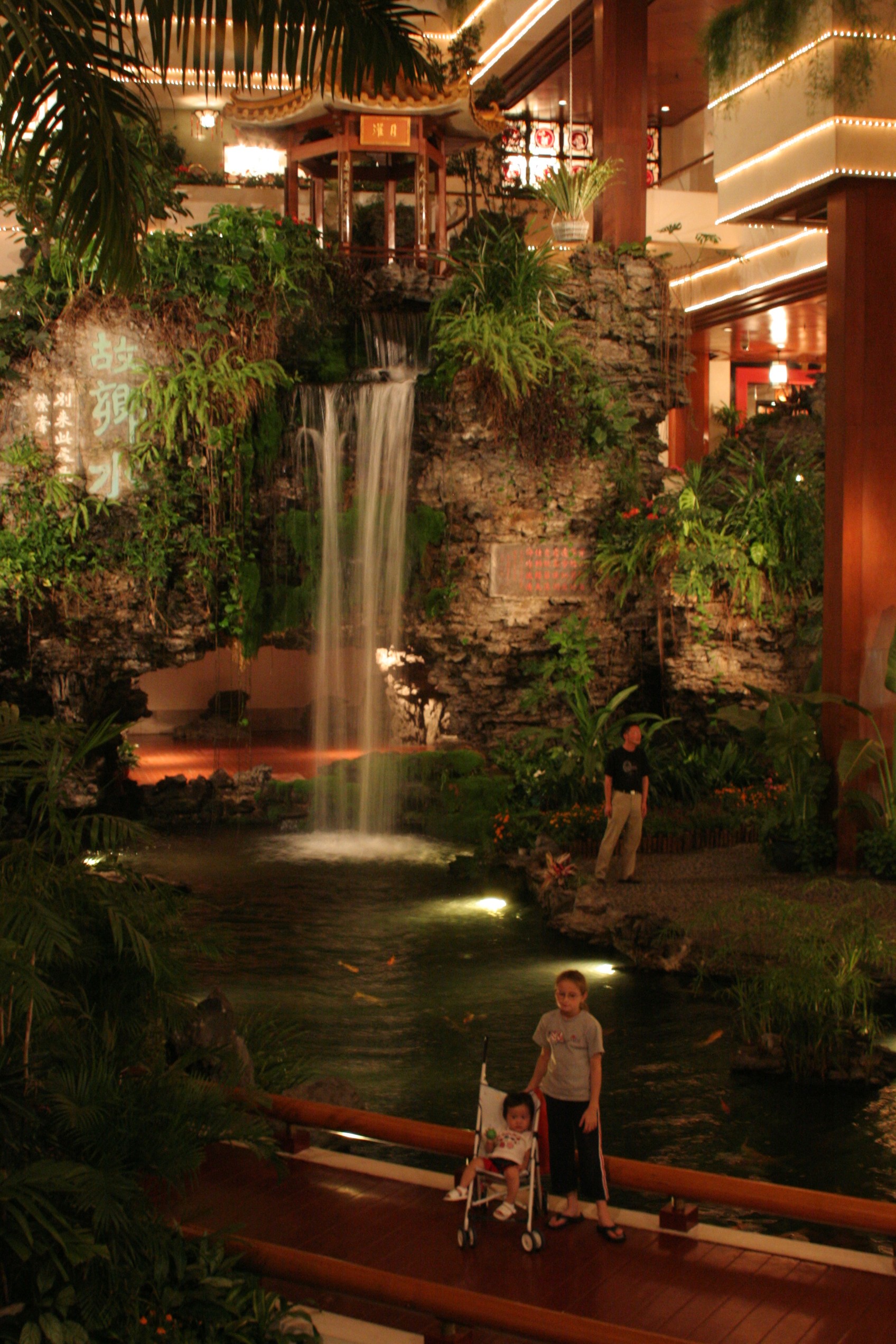 When we go out, everyone wants to get Abby, but she's too shy. She will allow young pretty Chinese girls to hold her. They probably remind her of her nanny. She is afraid of men.

Guangzhou is considered the South Gate of China as well as the capital of Guangdong Province. It is located on Shamian Island along the Pearl River, a major waterway for China. It is over 2000 years old. It is not quite as hot here as it was in GuangXi - and there's a breeze.

Mom & Abby enjoying the colorful lights and boats on the river. 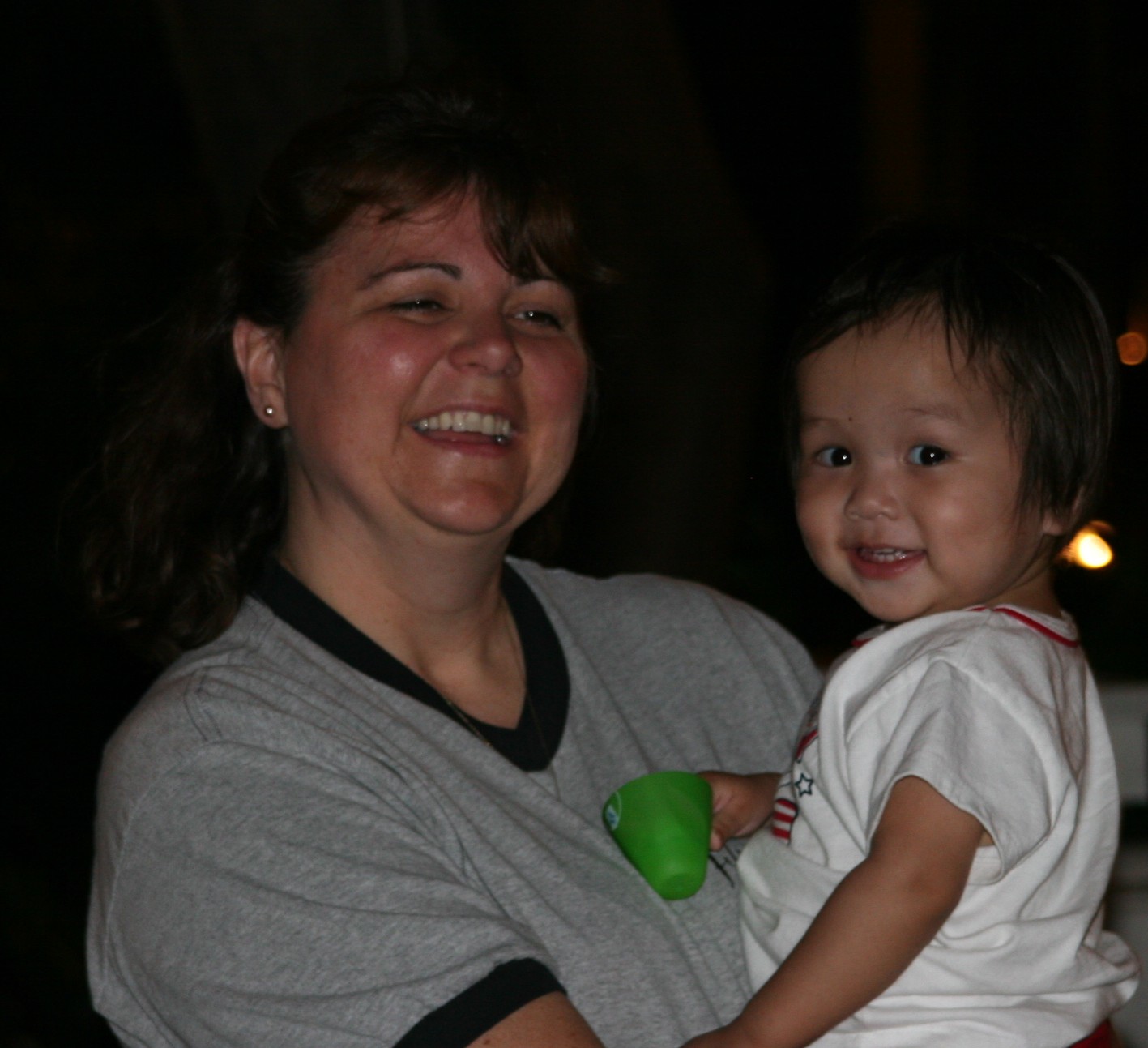 The airport was huge, but not very modern - at least where we were. Steph doesn't mind the squatty potties too much. I've been fortunate to not have to use one.

Guangzhou is a major and modern city in China. It has over 9.7 million people, and you can tell. There are many, many high rise apartment buildings. Some of the shorter buildings that you can see from the highway have grass rooftops. It looks so funny. We missed the pictures of the fancy ones. 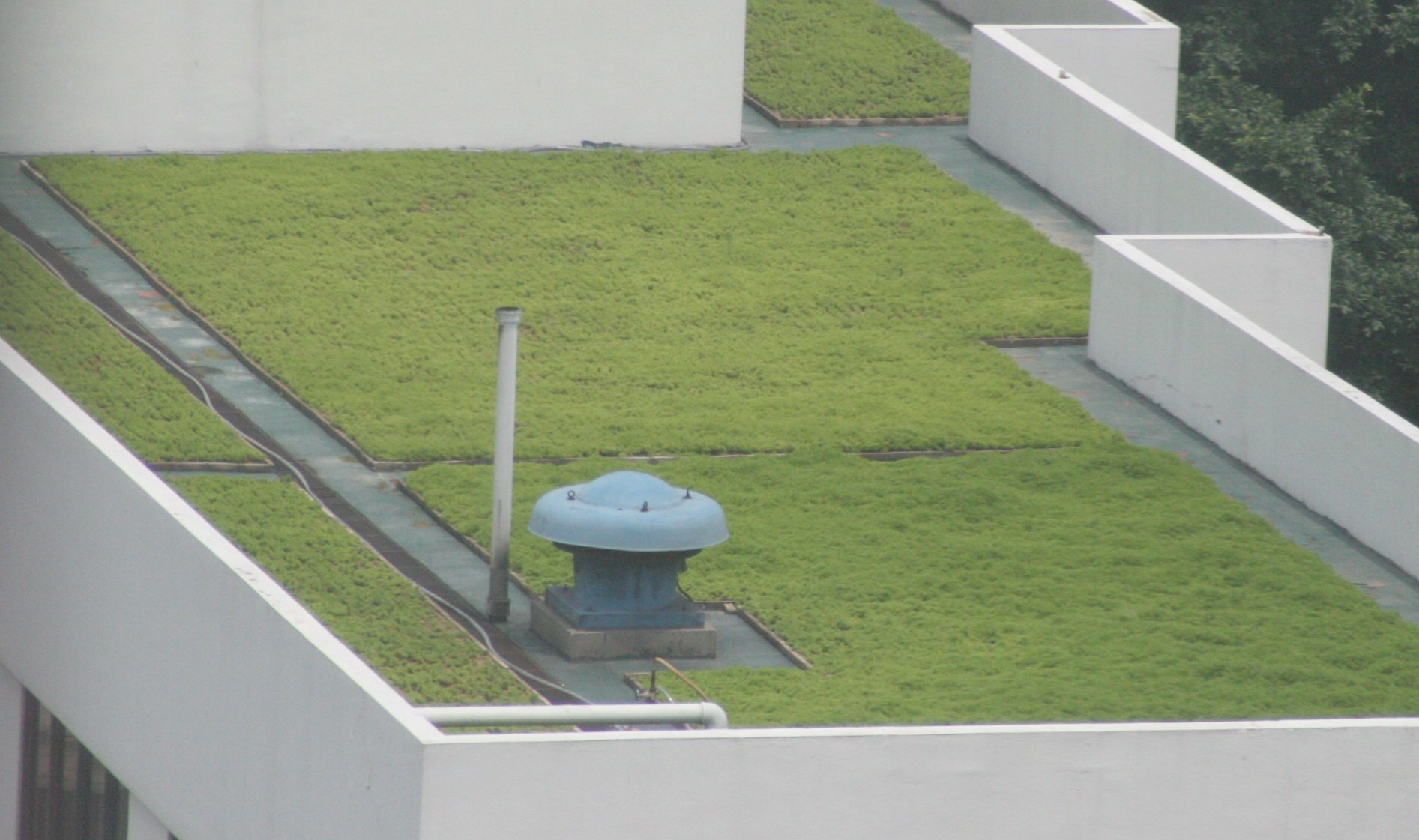 All 3 cities that we have visited have been very different from each other. This one is most like a US city.

One thing that they all seem to have in common, and that is very different from the US, is that there are no suburbs - no housing developments - no neighborhoods like we are used to. There are country villages, city villages, and the city. There is nothing that even comes close to comparing to Beavercreek.

The hotel is very nice, but our room is very small, especially with 4 beds in it. We booked for 4 people right from the start and even had to pay extra for Stephanie and we have the smallest room. The hallway (building) curves making the rooms in the center of the building much longer and the rooms at the ends much shorter. We have the very last room at the end of the hallway.

Abby will have to play in the hall. She is learning how to throw. There are many shops and restaurants in the lobby and tons of Americans with Chinese children. Pretty much, every family who comes to China to adopt stays here as we all must come to Guangzhou where the US Consulate is located. 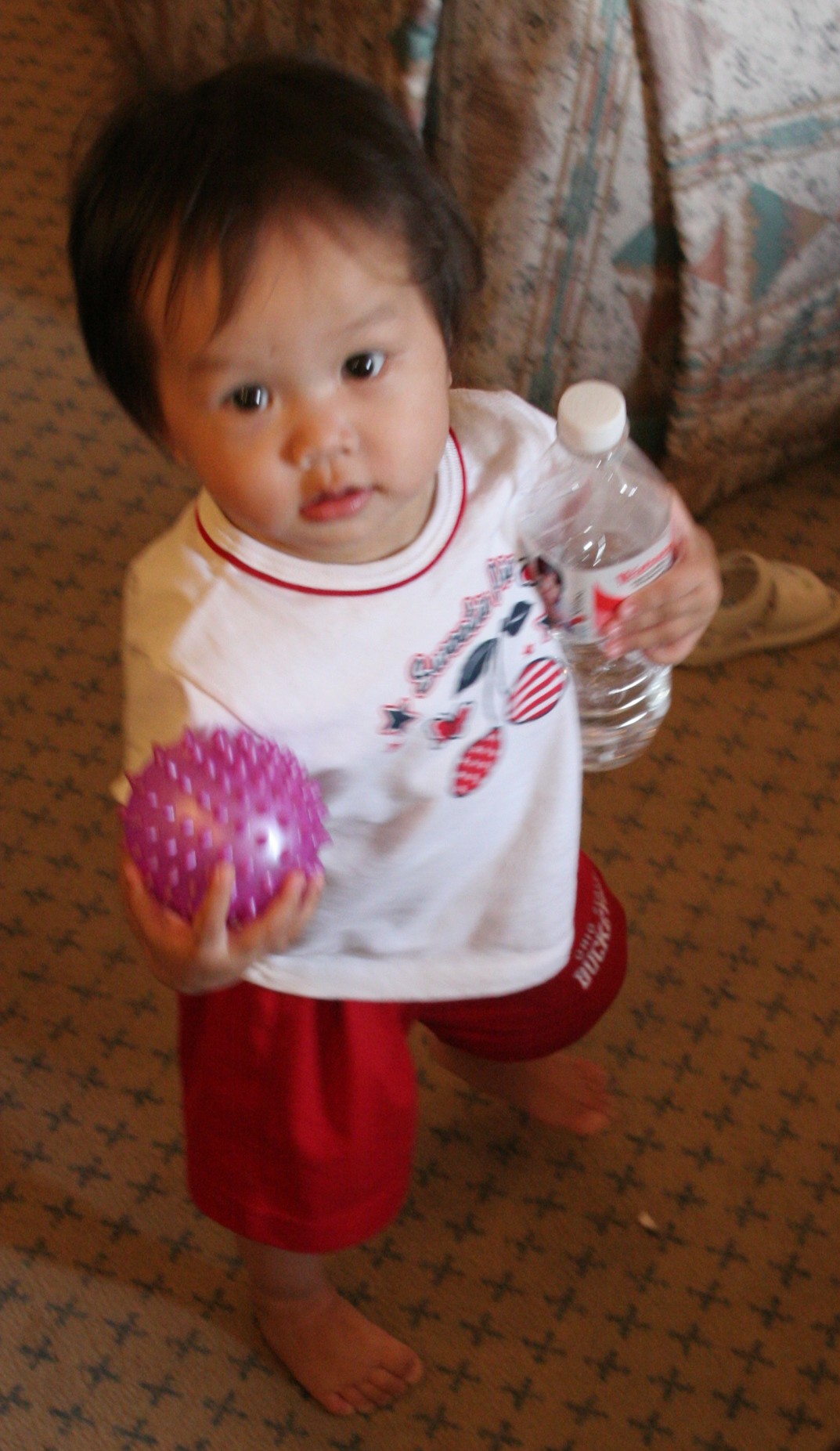 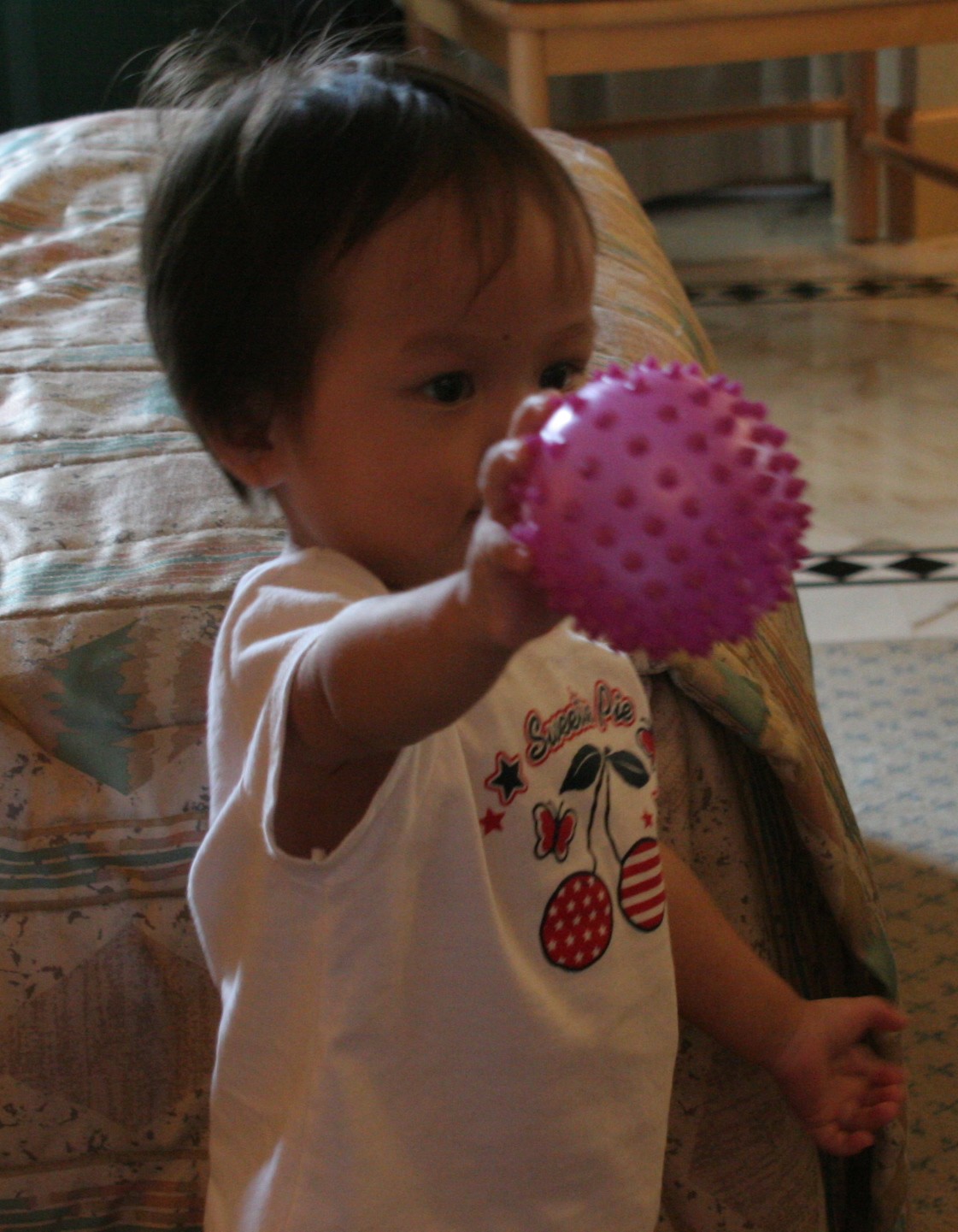 We will go to the US Consulate Wednesday for our final interview and to get Abby's Visa. We received her Chinese passport today and had her Visa picture taken.

Tomorrow we go to a hospital to have her examined. I hope she is healthy and ready to travel. After that more shopping. Our whole group is going downtown. 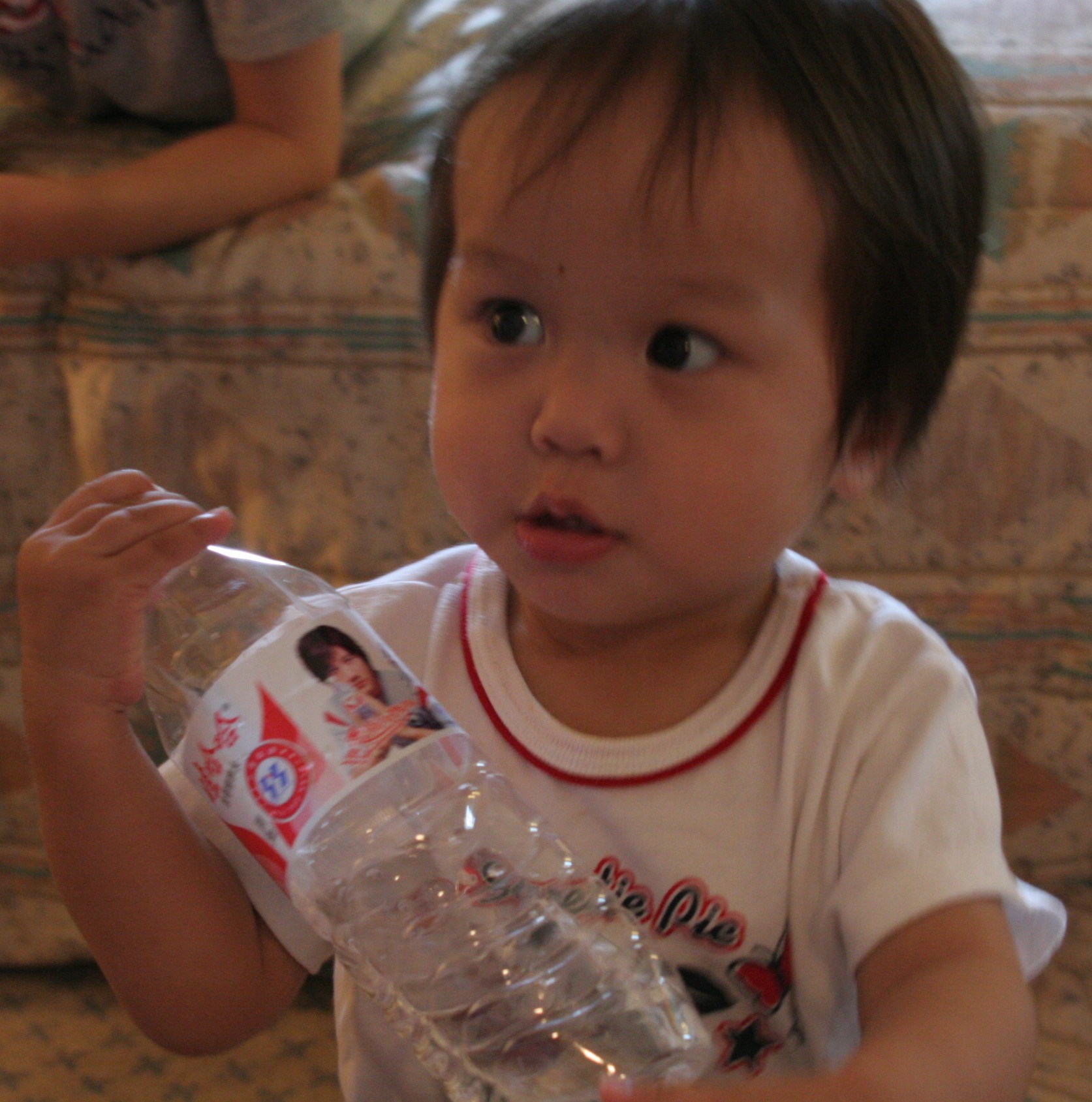 Abby's favorite toy - a water bottle with just a little water in it.

Today we drove 45 minutes to the airport, flew for 45 minutes, and drove 45 minutes to our new hotel. After our luggage arrived, we went to a delicious buffet and had REAL food. It was very expensive - $85US before the tip for 2.5 people for lunch. Can't eat there every day. Before we left home, we were given strict eating guidelines - no fresh fruit without a thick outside that can be removed (apples and strawberries NO; pineapple and cantelope OK); no fresh veggies, just cooked, no sushi..... Well, this buffet looked so tasty to me, I loaded up my plate with all of the above. When I returned to the table, Al was shocked that I was ignoring the 'rules' and eating all the no-no foods. They were dilish!!! Then, after I didn't fall over, he went and filled his plate too.

We are having a pool party with 2 other families tonight and ordering Pizza Hut. I never eat there at home, but I'm so excited!!! The people who have been here before say it is the best in the world. I think it's just because we are so desperate for something other than Chinese food. Still no fountain coke.

Then we went shopping and bought some really cool stuff. We have to buy an extra suit case to get home.

Right now Abby is sleeping, Stephie is swimming, and Al is unpacking. We are here for 3 nights, then back to Hong Kong, then HOME!!!

Abby didn't sleep well last night. She only sleeps about 20 minutes then she cries in her sleep and throws herself all over her bed and mine. We had to get rid of our crib because our room is just too crowded. Steph's bed is squeezed between Al's bed and the window. We have to fold it up to get into our mini frig. Others who have experienced this sleeping patterns with babies said that their pediatricians describe it as night terrors. It may last just a few days, or months, or years. Oh No.

Abby sat in a high chair for the first time today and fed herself spaghetti, cheerios, rice, and a banana for lunch. She did pretty well, but we found noodles in her shoes when she stood up.

Steph has been playing games with her and finally figured out how to make her laugh. 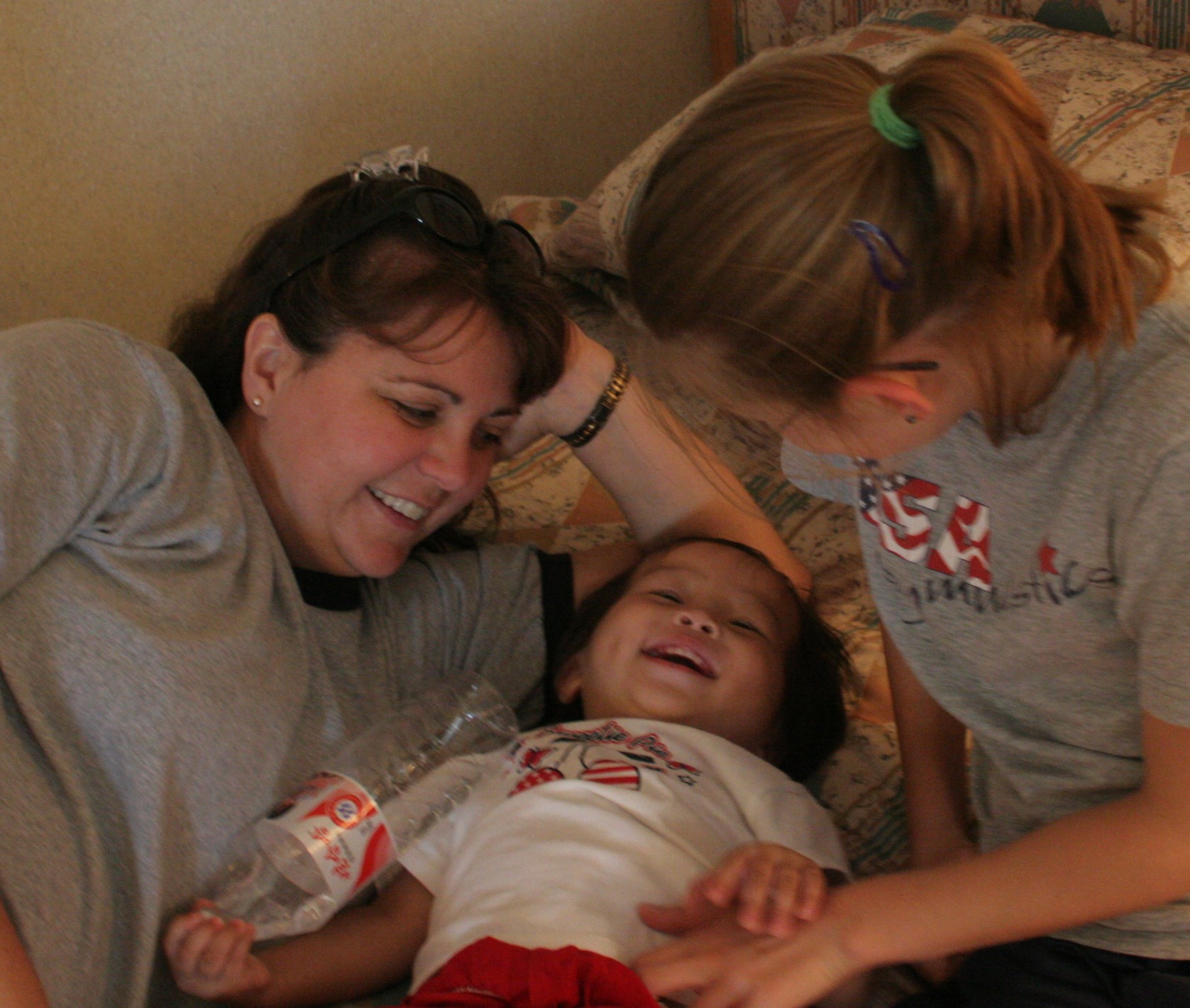