Today started out as any day you might expect when you're anticipating flying 17 hours with a new baby. We dreaded the long flight home, but were anxious to be leaving.

Things got worse as the day went on.

We're excited to sleep in our own bed - if we can get any sleep. Abby usually allows between 2 and 4 hours per night.

We're excited to get Abby on a schedule and have her go to sleep and wake up in the same place every day.

We're excited not to have to ride a bus every day.

We're excited that everyone speaks English - a language we understand.

We're glad to be done with hotels, elevators, and strollers for a while. 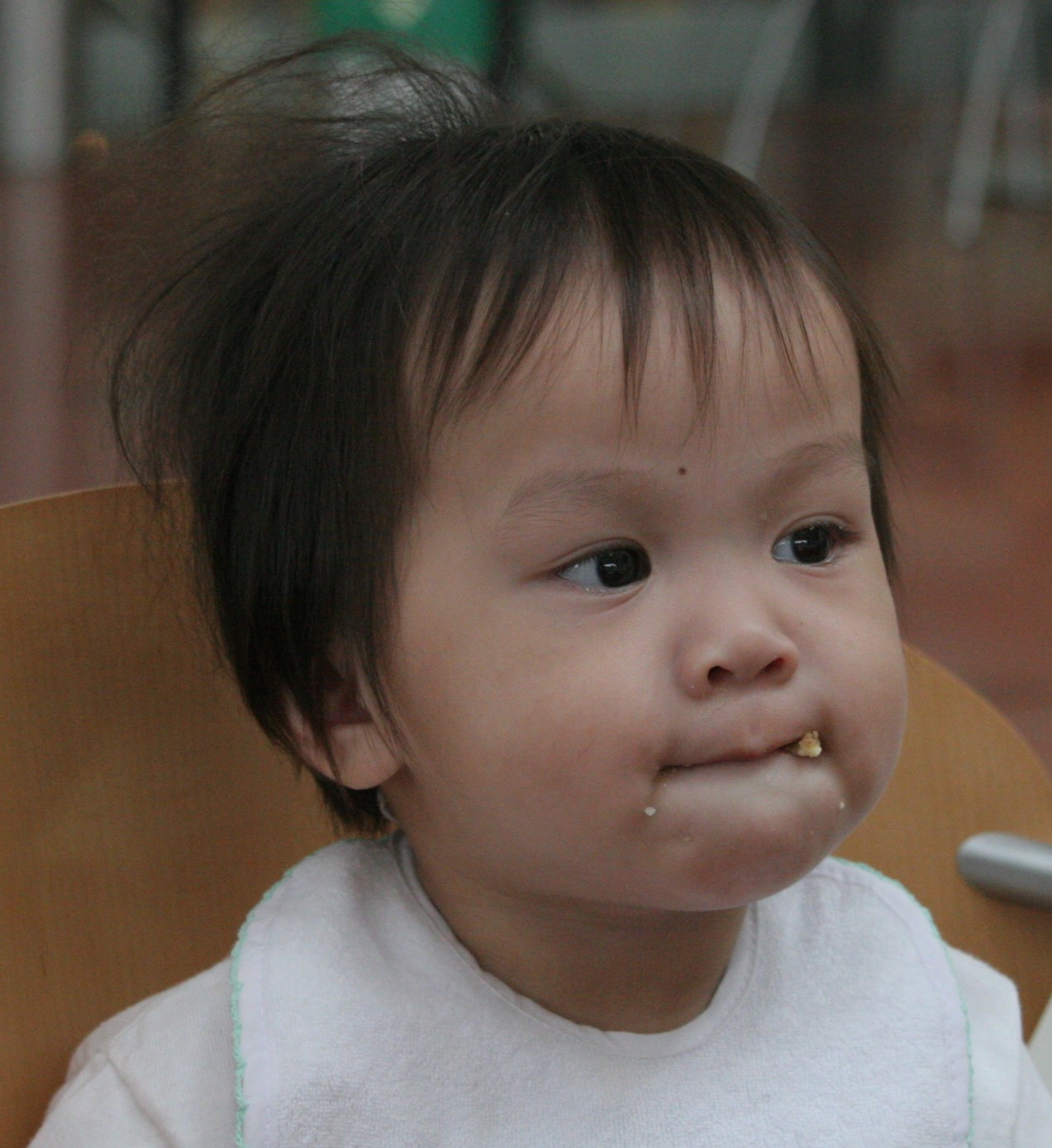 Breakfast at Burger King at the Hong Kong Airport 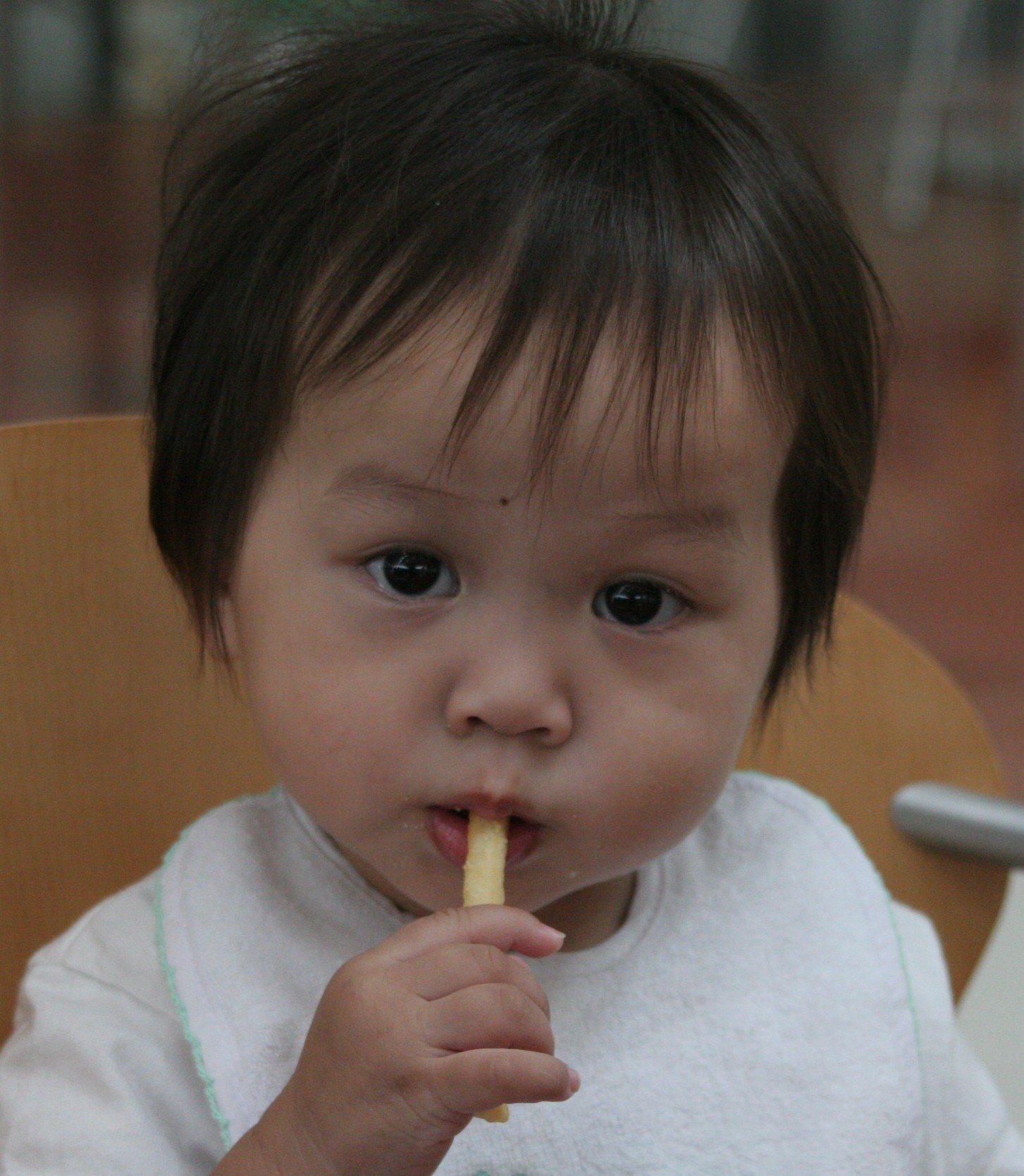 At least we're bringing her up right - burgers and fries

We were a little disappointed to be in the very back of the plane. It meant we had to board almost an hour early. It's not bad enough to sit there for 16 hours, but then to have to get on early - YUK! It also meant that we would be last off. We were excited to learn that the back section of the plane had more leg room. YEAH. I could sit back in my chair and stretch my arms straight out in front of me and just touch the chair ahead of me. How exciting. We bought 4 seats instead of just 3. Good decision.

The flight started out a little bumpy - drinks flying everywhere, but it soon got very smooth. The first 10 hours went by fairly quickly. I watched tv and held Abby most of the time. She played in the isle for a little while with a couple of friends. They shared toys and went through the isles begging for cheerios.

About 9:30pm I gave her to Al for bedtime. For the next 6 hours she fought sleep and fussed like crazy. Stephie slept for about 5 hours. Once when I went to the bathroom and returned, she had stretched out across all 3 seats. Little stinker.

Flying over the Arctic was pretty cool. There were no clouds. We still did not see Santa.

Most of Canada was still snow covered as well. I love when there are no clouds and we have a window. The coldest temperature I saw this time was -76 degrees F. WOW! The highest altitude I saw was 39,500 feet.

As soon as we landed, the GuangXi group all clapped. Then we started calling out Family # 1, Family #2 in De's voice. We landed a few minutes early - how excited we all were. We had to wait for our gate to be ready for about 20 minutes - it seemed like an hour. All the babies were pretty good - especially considering they were confined for so long. Our quiet, calm one was pretty active and curious.

As soon as we got through customs and found our gate, we had just an hour to wait, Al phoned home to find that our long-time friend and loyal companion, Tiffany, had not survived the stress of 2 weeks without us. She was 13 years and 7 months old. We'll certainly miss her.

Then the announcement came that our gate had changed. We picked up everything and moved.

Lots of flights were cancelled due to weather. We stood in a re-booking line with hundreds of others for 2 hours. We were able to get on an 8:30pm flight.

About 6:00, they delayed our flight until midnight. This meant we would not get to Columbus until almost 2am - home by 3:30am. We decided to stay over. We could not get a hold of the Ganley's. They waited in Columbus for us until 2am. So sorry.

We stood in line after line after line - 8 in all to get booked for Saturday. It took 6 hours. Lots of people were in the same boat as us, except they hadn't flown for 16 hours. Although we did meet a couple from India who had flown for 26 hours. Their flight stopped in Paris for a 2 hour layover, but they were not allowed to leave their seats. What torture. The crew cleaned the plane around them.

We finally got to our hotel after 10pm. We had been up 28 hours. Al and I each got about 1 hour of sleep on the plane. We were exhausted. We were too tired to stand in the last line to get our hotel paid for, so we lost out.

Since we thought we were flying home, we gave away some of our diapers to those who could not get out. We kept just 2. Now we were out and none were in sight. YIKES! The airport stores were closed and our cab driver spoke very little English and he didn't know where a store was. Our hotel did not have any diapers either. Double YIKES!

The next time you hear from me, I WILL be home.