Abby is walking much better with less wobbles. She is even trying to run. I think she has gained several pounds since we got her. She wears size 9 - 12 months clothes. She's pretty small. 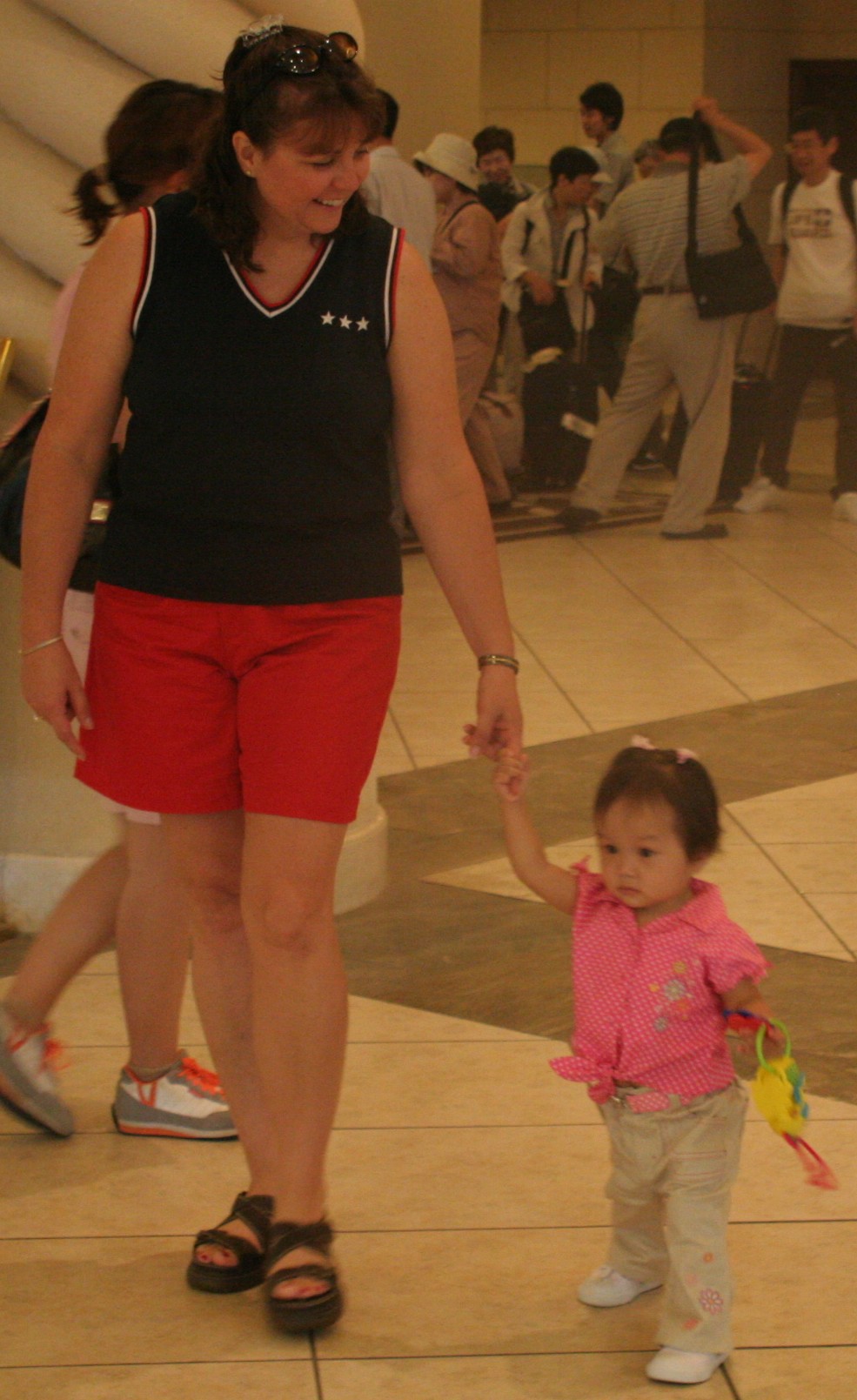 We went to Reed Flute Cave today. It was very pretty - big too. We were looking so forward to cooling off in the 54 degree temperature (like at home), but no luck. It was maybe 70 and still 900% humidity. I have never experienced heat like this. Everyone sweats all day every day. Even the buildings are not very cool. There is no wind - not even a slight breeze. Just dead air. 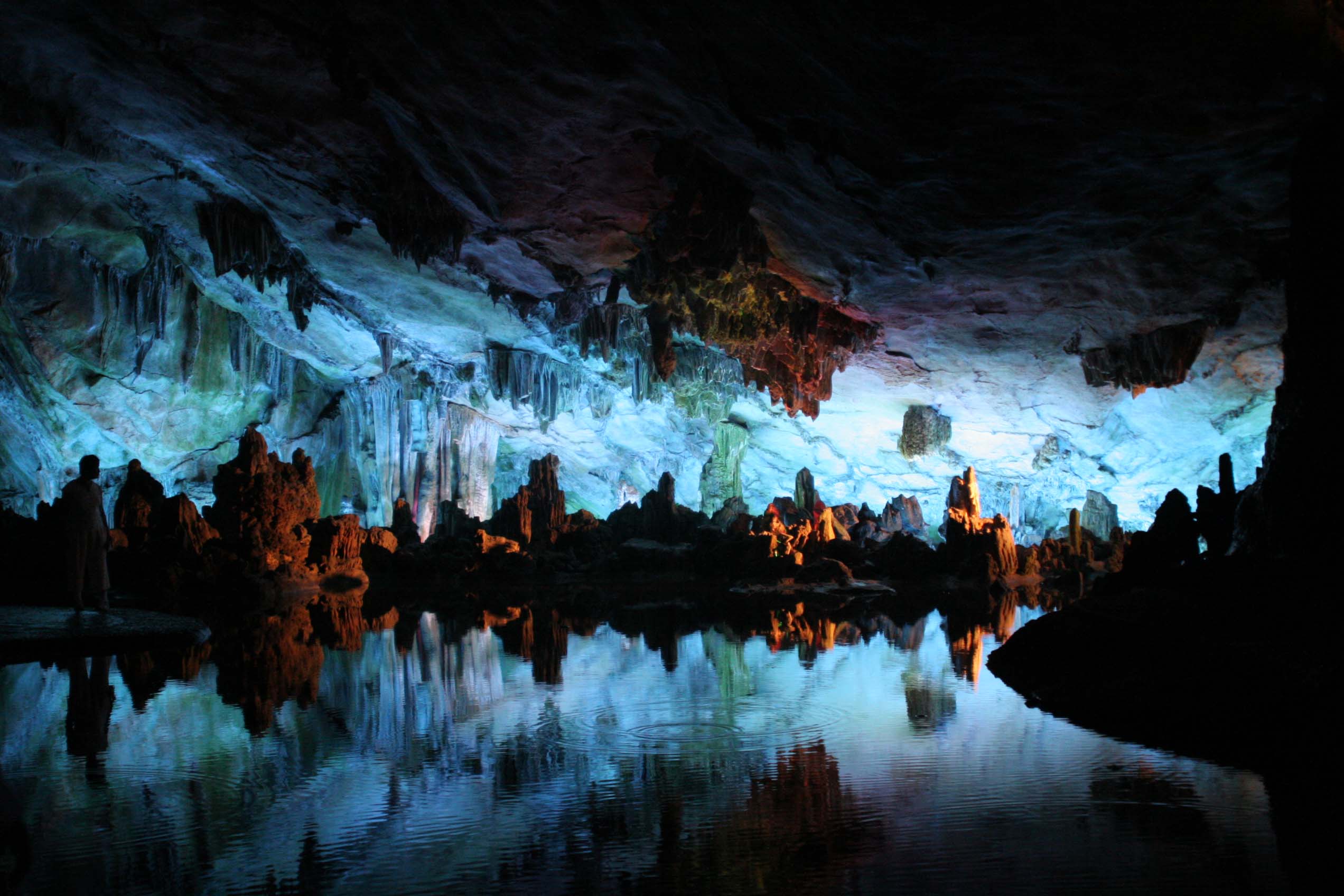 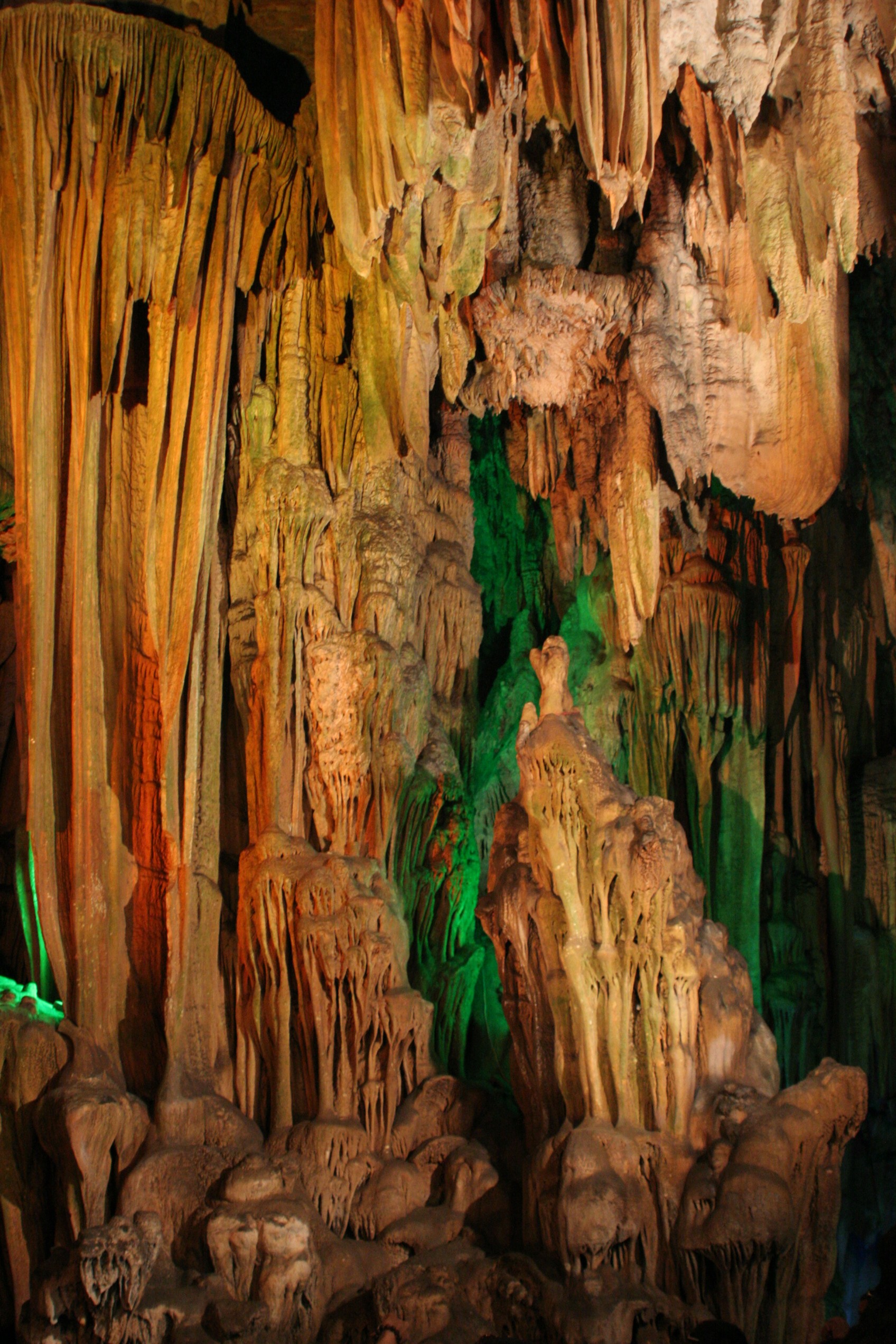 Unfortunately most of the cave pictures turned out blurry because of the slow shutter speed in the dark.

There are so many 'sweepers' here. They even sweep the highway. 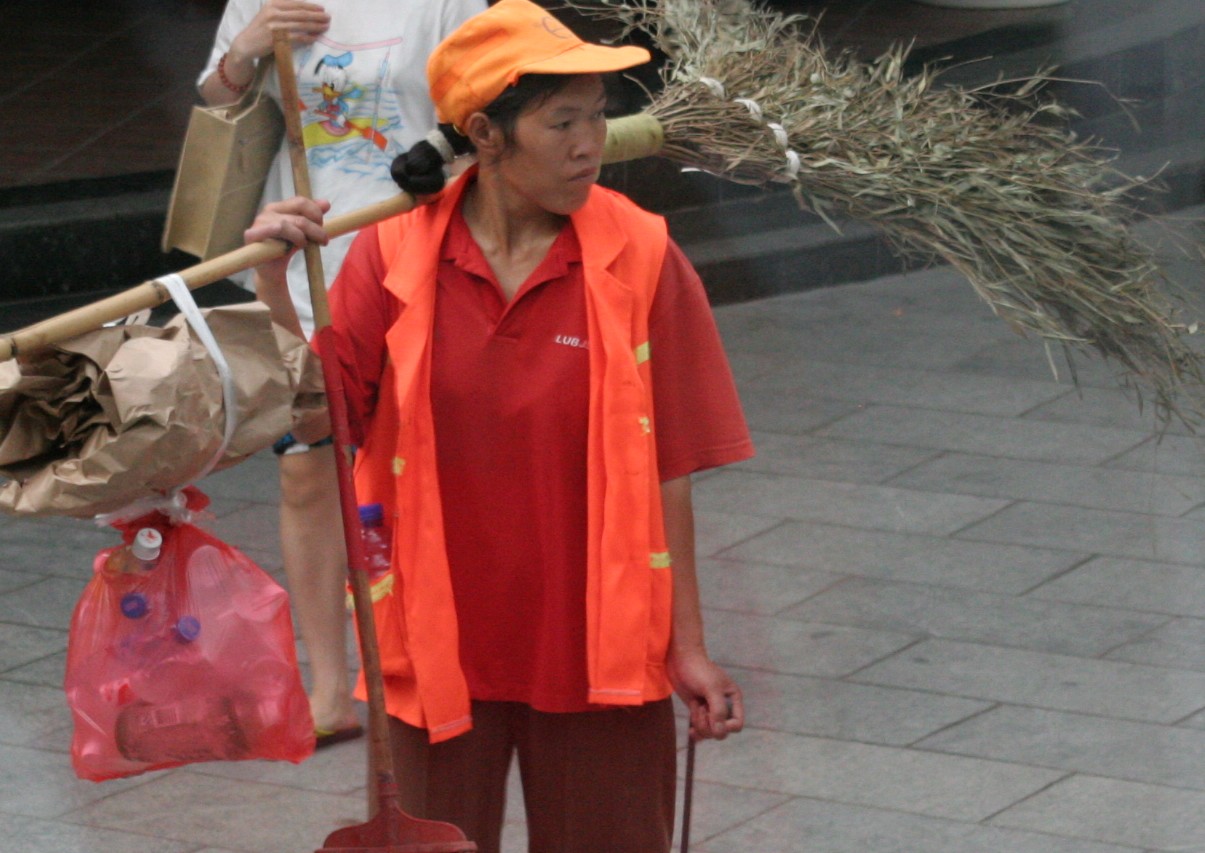 Abby has really come to life today. She can't stop smiling and has even started laughing. She will walk around our room a little on her own. She likes to play fetch. She has a favorite friend, Katelin, from the orphanage who is a whole year older. They laugh and make noises every time they see each other. She doesn't do that with any other babies. She knows hi-5. She waves and points. 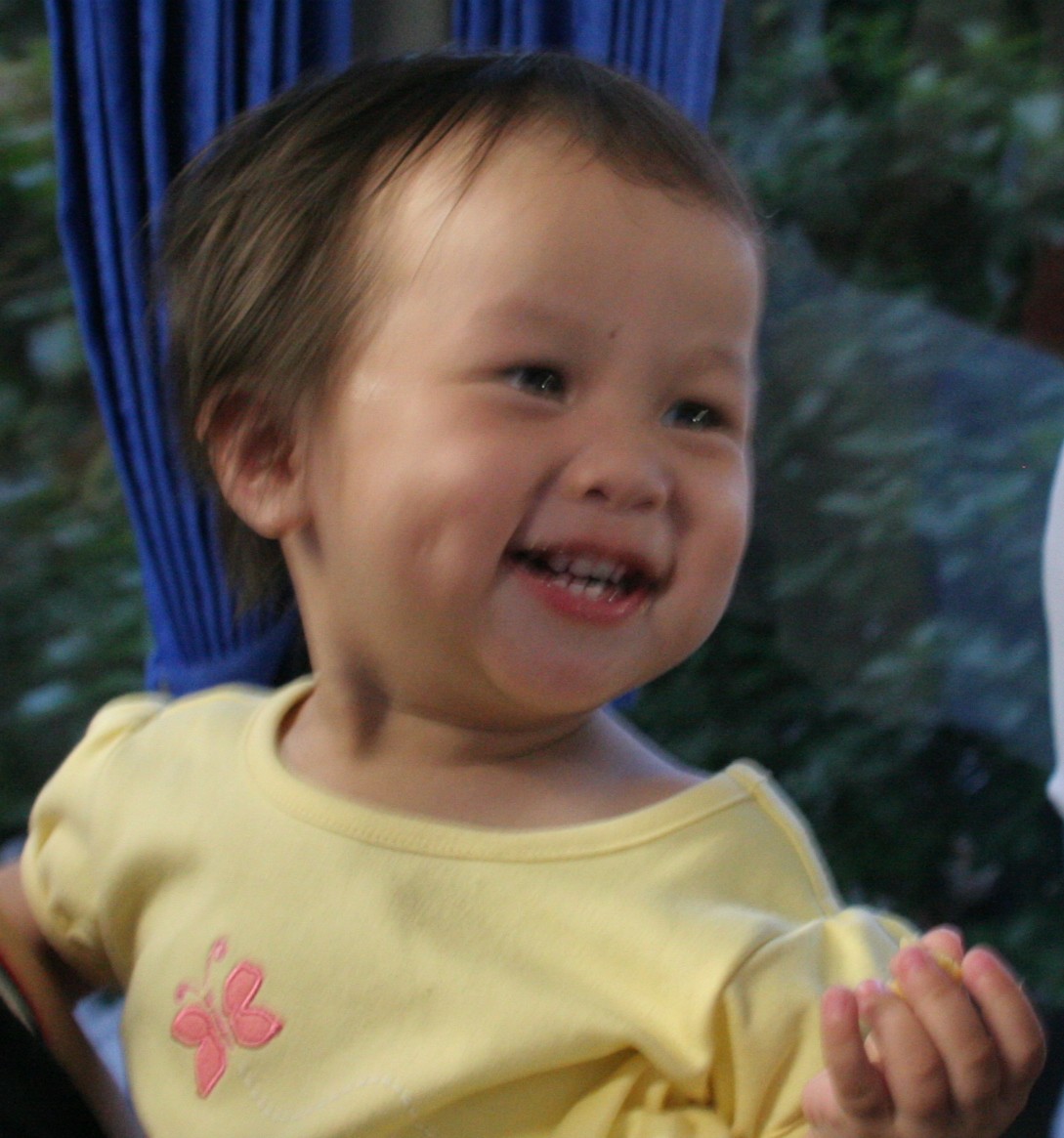 She is stacking the rings on the cone today! She's tries to imitate what we do.

We went to a pearl factory today. Steph got a pair of blue pearl earrings. I got blue, pink, and white. They are very pretty. Ninety percent of the world's pearls come from Asia.

Everywhere we go, people love Abby. Everyone comments on how beautiful she is - fair skin and big eyes. I guess those are good features to have in China.

Lunch was great today. It too was served family style, but most dishes had serving spoons. I got my bottled water! I liked the duck, pork, rice, and several other things. It was so hot in the restaurant that Al could hardly eat.

In the afternoon, I took a taxi and went downtown to print some pictures for postcards. It was fascinating. There were NO Americans and no one in the photo shop spoke any English. They invited my back into the lab so that I could show them on the computer what I wanted. Imagine a Chinese keyboard....

So our translator, Jenni, took me in the taxi to the shopping area. I thought we were staying together and returning to the hotel together. WRONG! She dropped me off at the town and said goodbye. She gave me a business card, written in Chinese of course, and then wrote some characters on it. She told me that when I was finished I should walk about a block or so out of the shopping area and find a taxi. She said to give the driver this card and he would return me to the hotel. Well, somehow it all worked out! It was a fun adventure. I did not take the camera with me though.

I got all the pictures printed in just a little over an hour and I had already made the backside of the postcard before we left home. Now I just need to stick them together and get some postage. 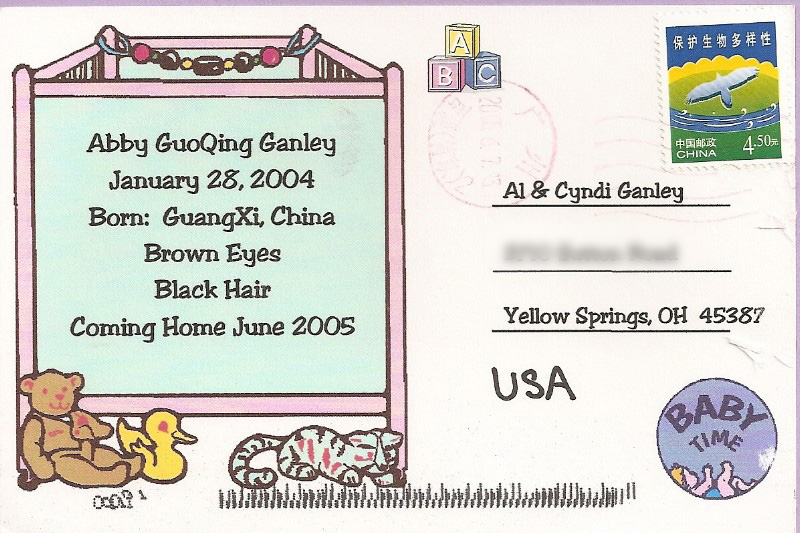 I shopped for a little while waiting for my pictures. I met a guy who is a middle school teacher. He taught himself English - it was pretty good. His dream is to come to the US - "the greatest place in the world". Our translator, Jenny, also hopes to come to America. Apparently many have that dream. Everyone here is very polite and respectful.

It doesn't seem like there are too many traffic laws, but no one gets mad when people turn in front of them. Really big intersections have no traffic lights - cars, bikes, motorcycles, whatever are just driving everywhere and there are no accidents, no horns, no cursing, just calm, patient people. WOW! I've never seen anything like this. Walking through the city today, I noticed that no one was in a hurry. They just stroll along. The streets were filled with vendors.

While shopping I found a cave postcard just like the picture Al took earlier today (the blue one above). I couldn't believe it so I bought it.

We went to see Elephant Hill this evening. It is one of the things Guilin is known for. Little kids as young as 4 were selling things there. Who knows where the parents were. A little girl grabbed onto Al and wouldn't let go. A lady had to pull her off - and it wasn't her mom. De told us that she was begging Al to take her home with him. It was so sad. 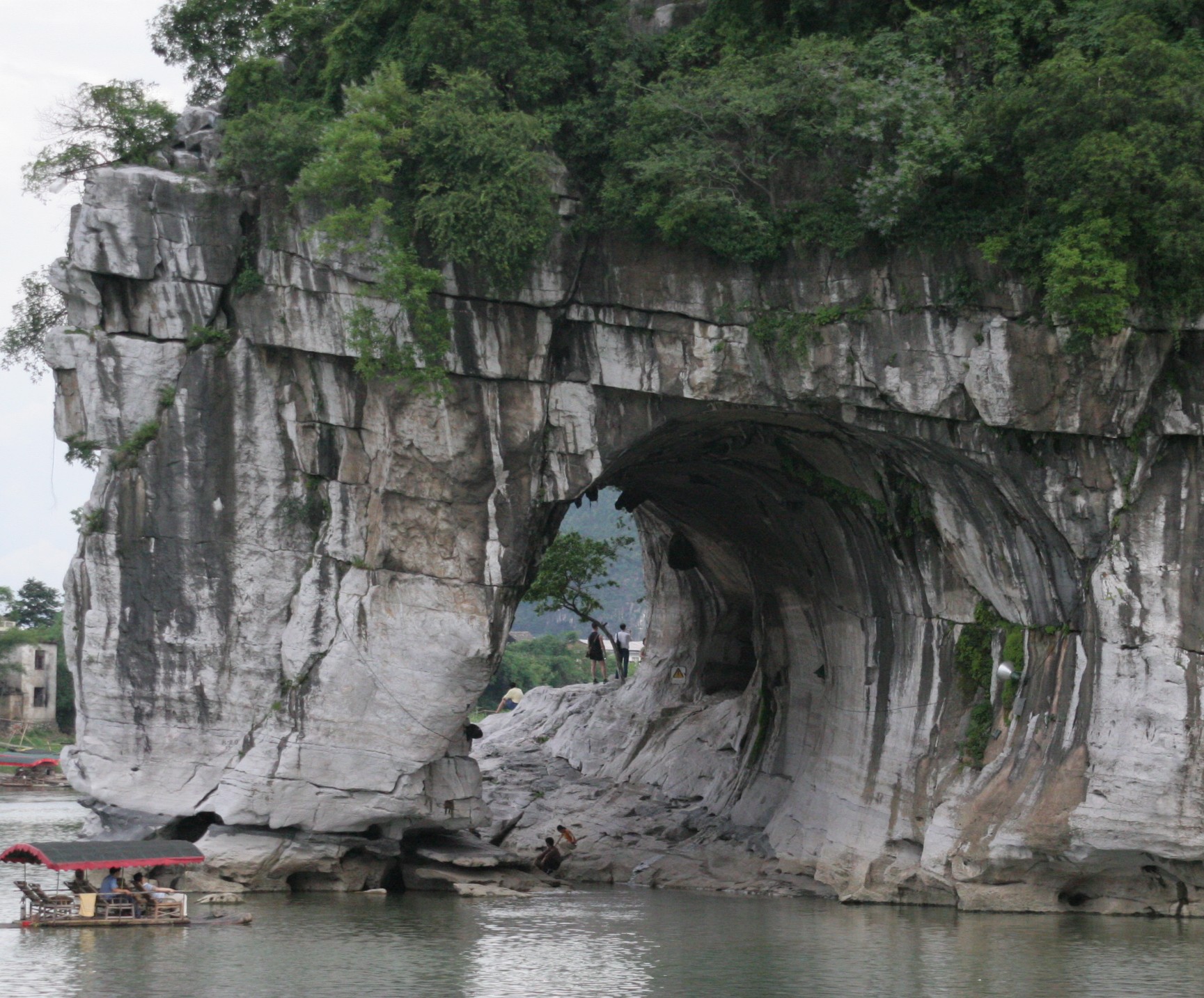 From the highway up above the city, it really looks like an elephant with his trunk in the water. 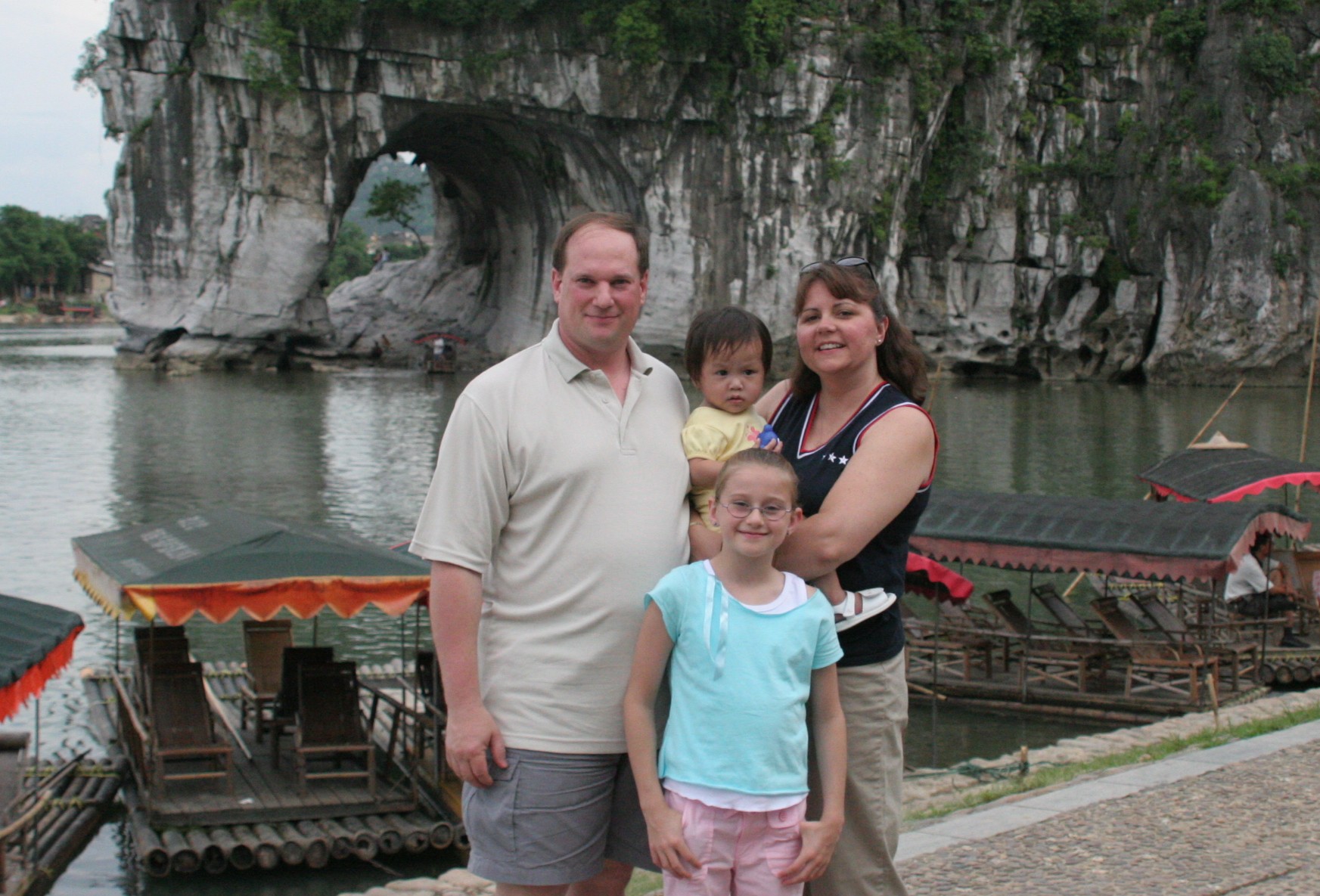 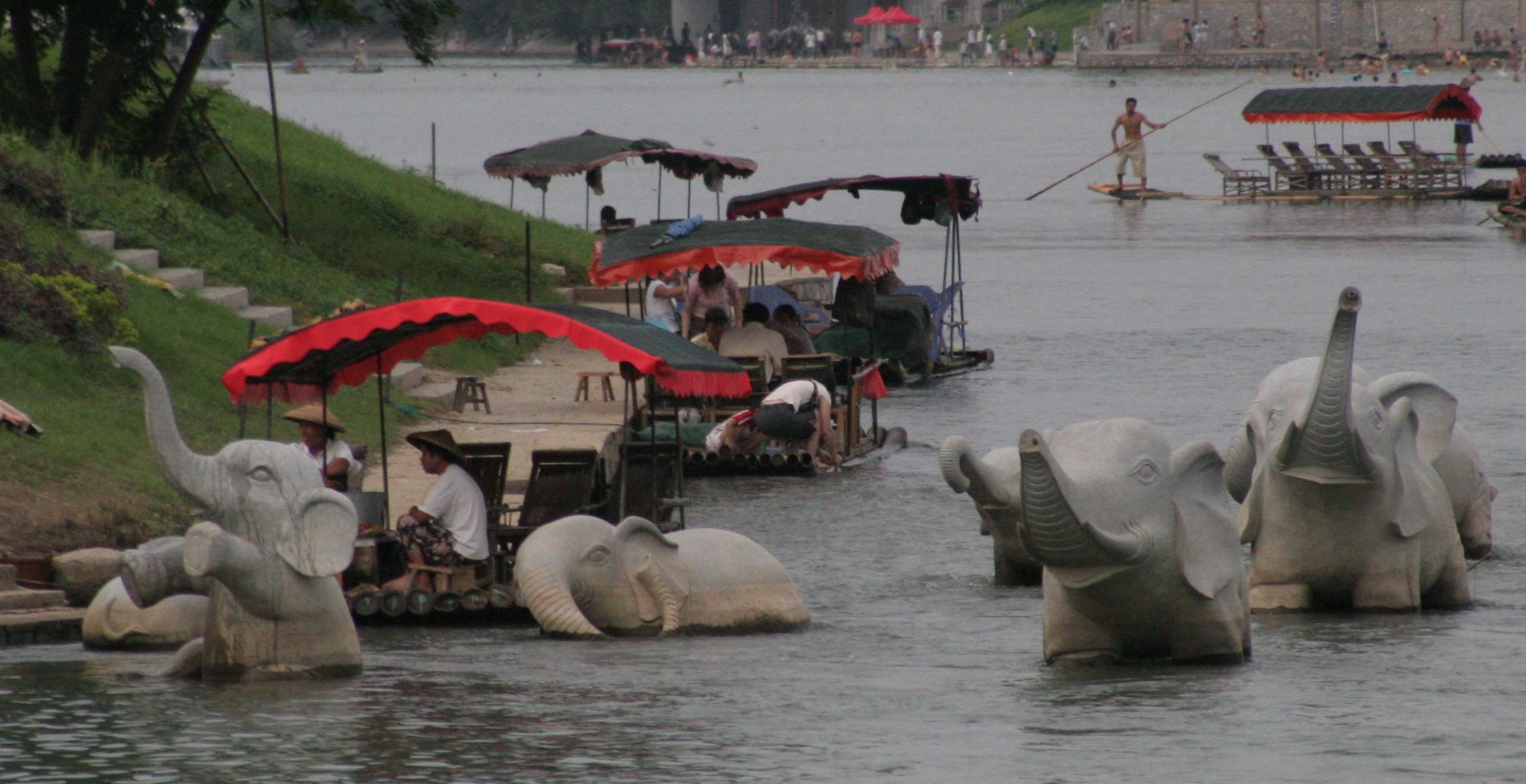 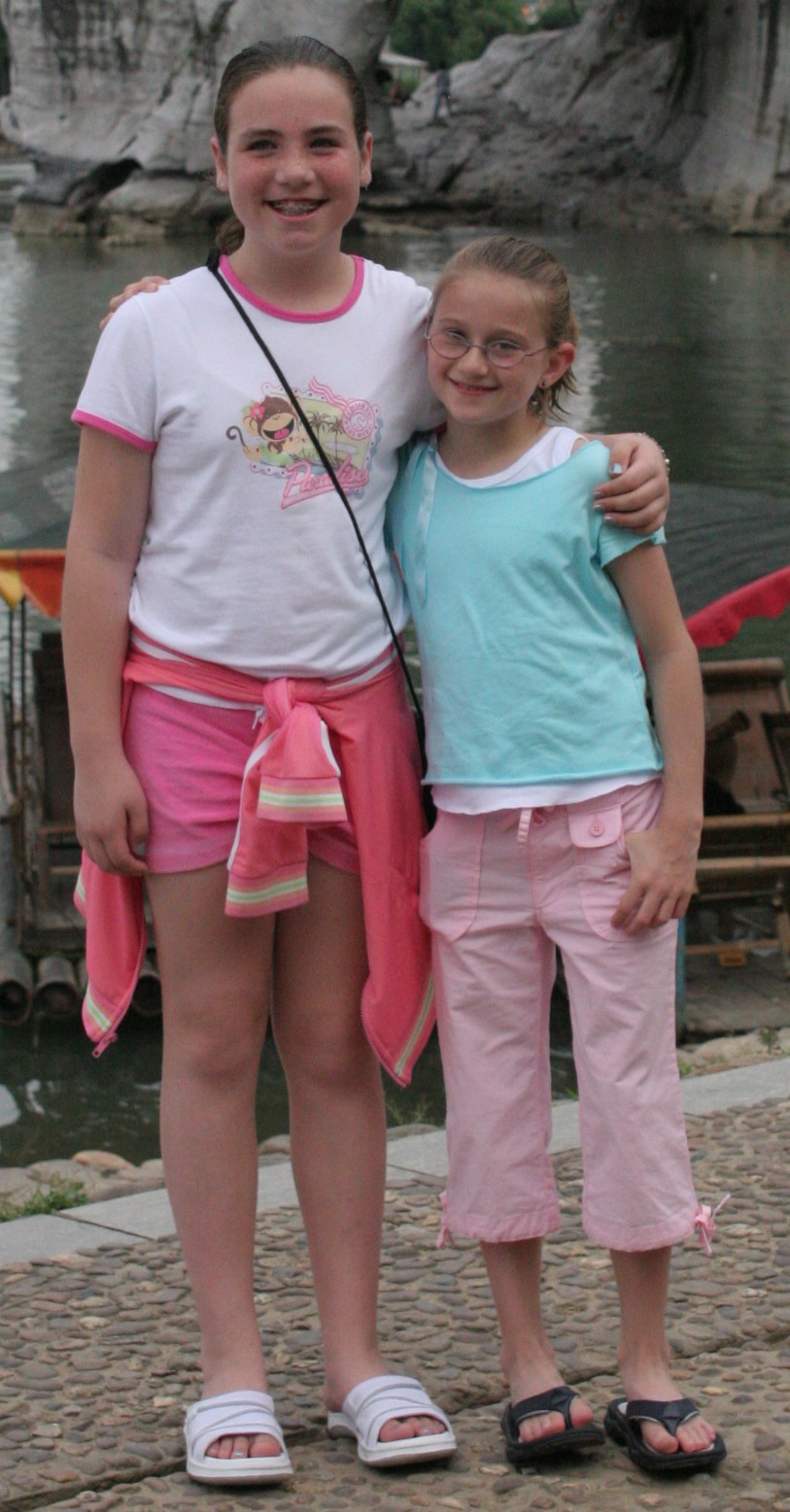 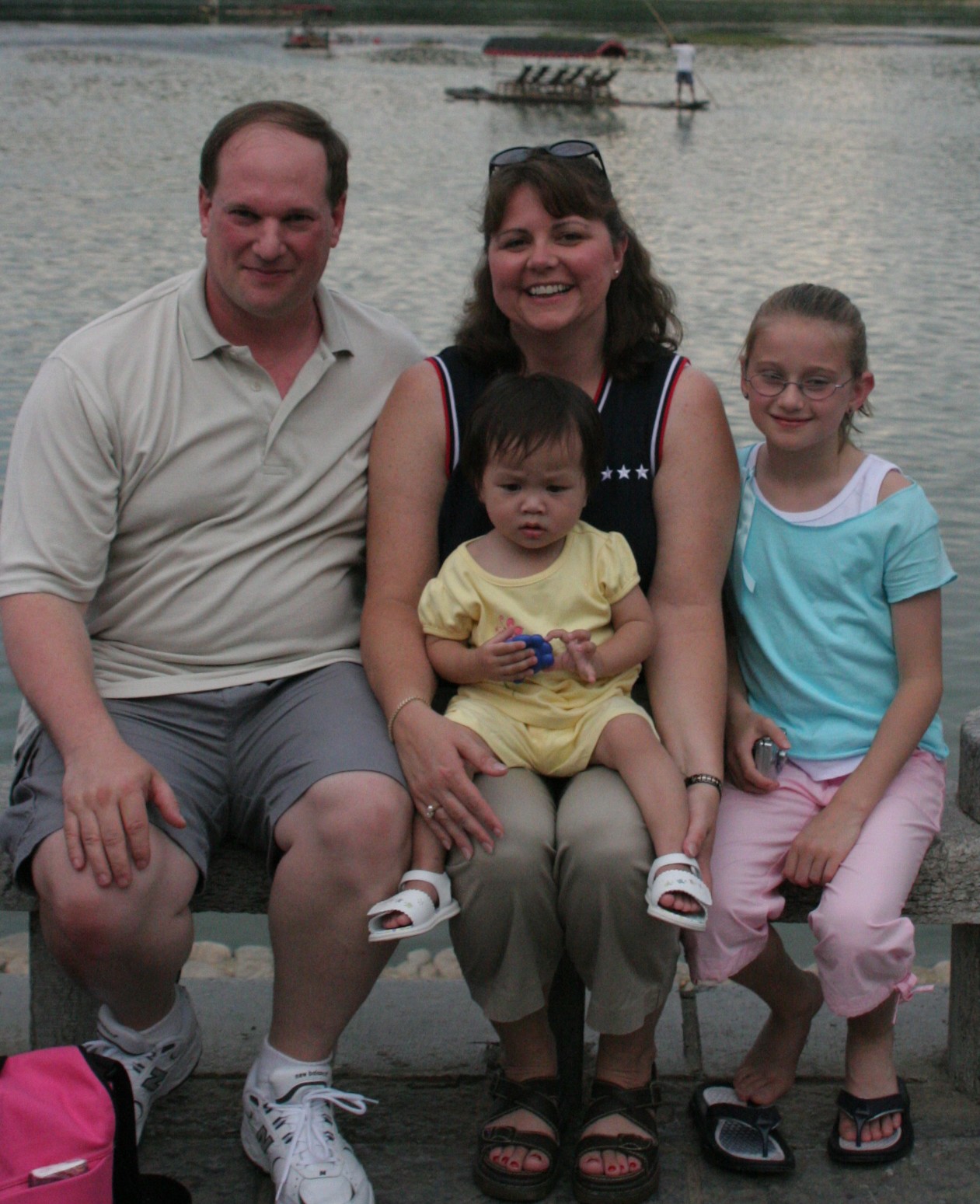 Chinese Pagodas near our hotel 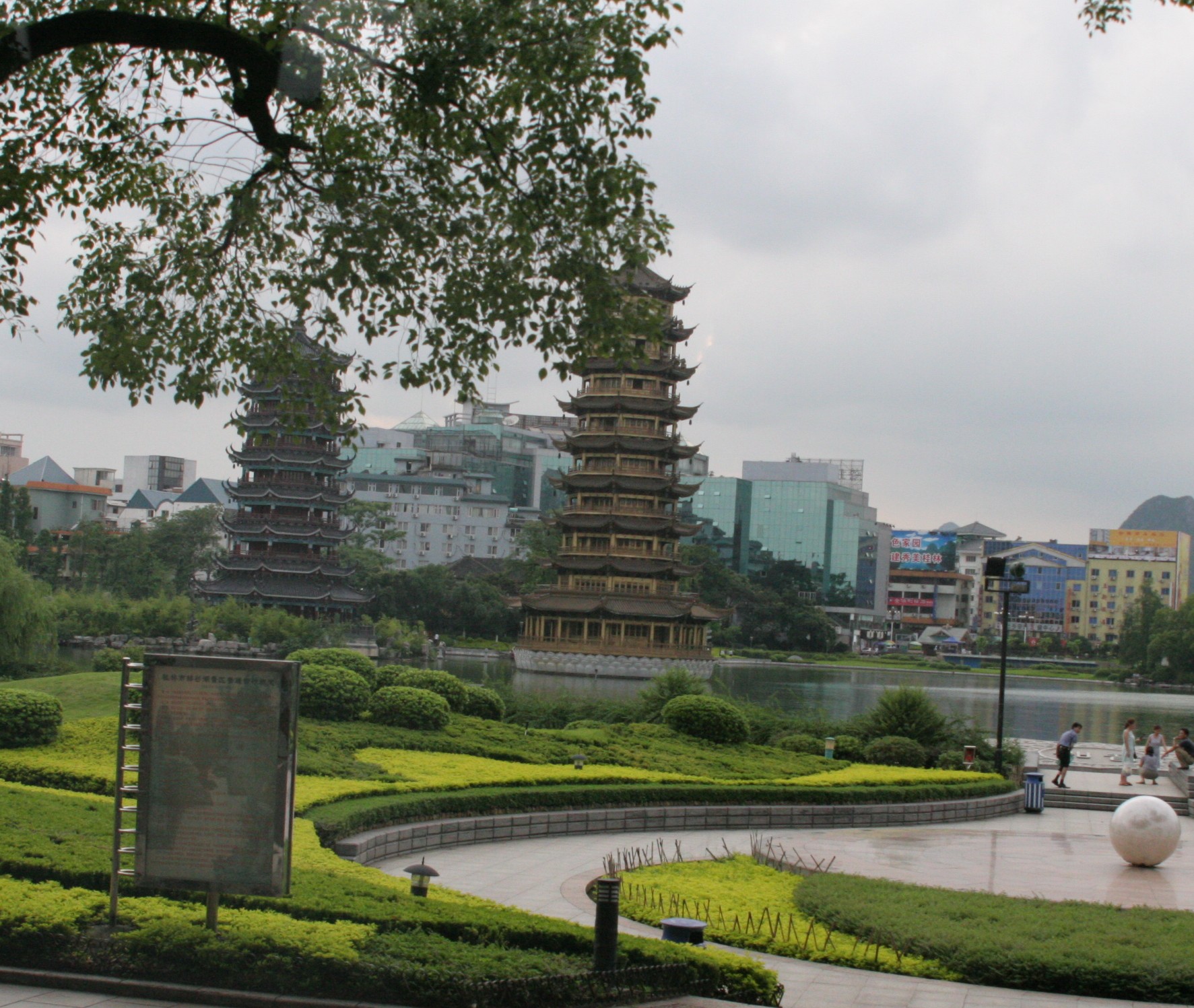 I'm not sure of the spellings of some of these things. My resources are limited.

Dinner was not so good - another Chinese buffet. They had many choices, but not many I would try. The fish dish was whole fish (head, fins, tail, eyes, everything) in some type of sauce just dumped in a pan. YUK. Not all the dishes had serving spoons. There are really no food standards that I can tell. Food is just out in the open, kids serve themselves - very different from US. I'm hoping for McDonalds soon. I haven't had my fountain Coke in days.

After dinner we went to see an 800 year old banyan tree. The area was beautiful - right out of a magazine - a beautifully landscaped lake setting with Chinese architecture, colorful lights, pagodas, bridges, and of course the big banyan tree. 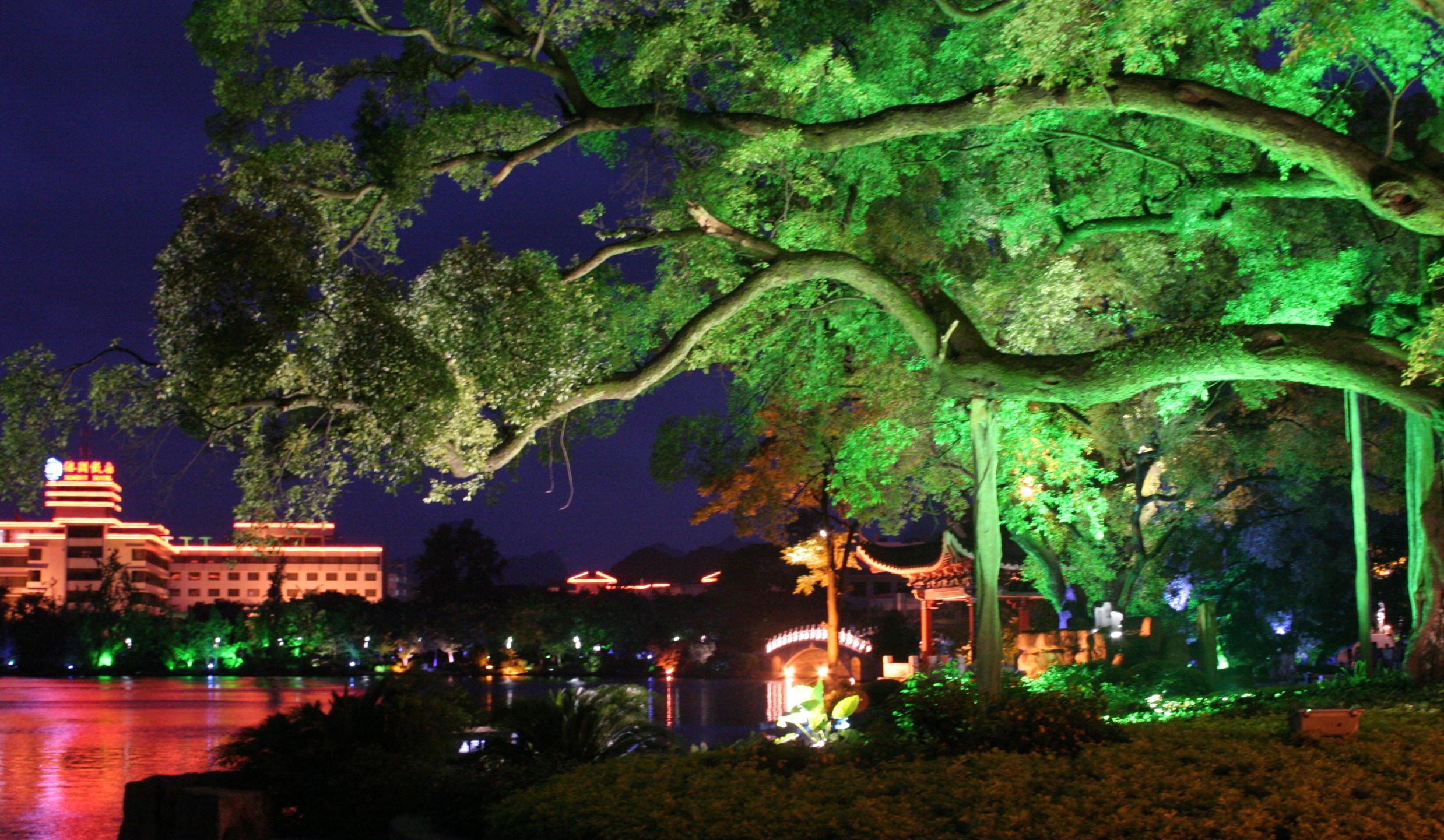 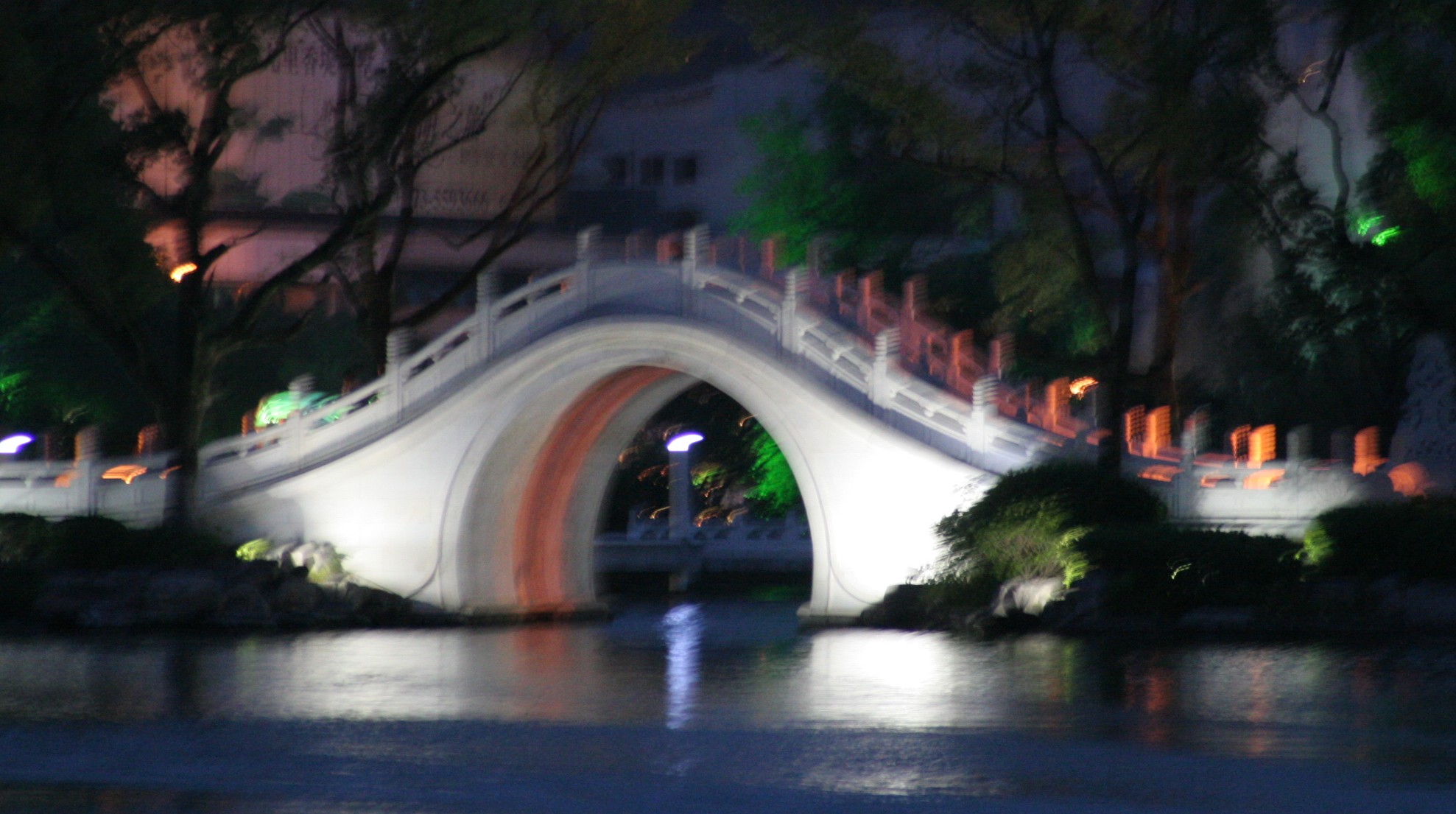 Their version of the Golden Gate Bridge. Looks more like the Brooklyn Bridge to me. 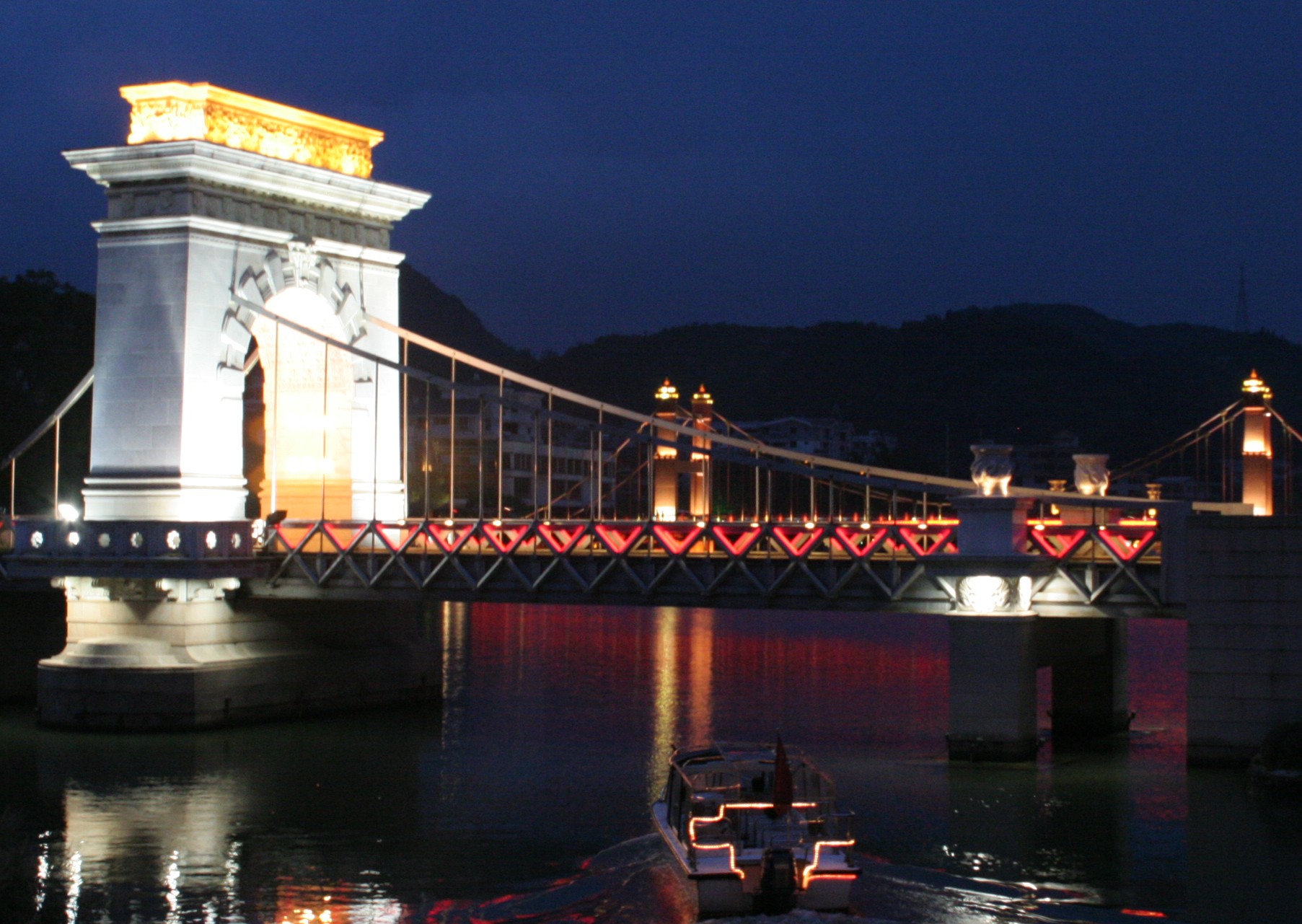 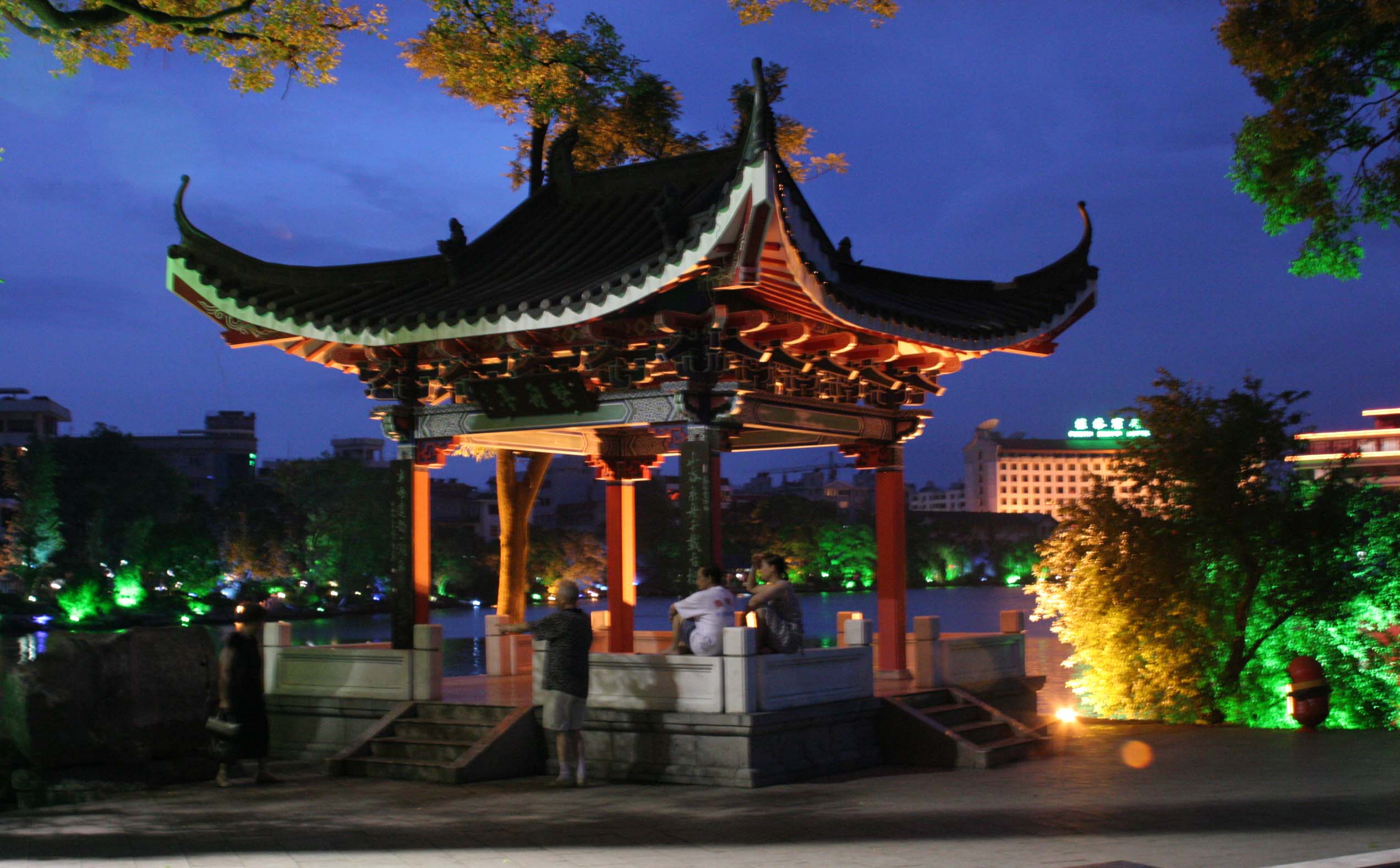 I got about 20 mosquito bites tonight - I hope I'll survive.

The plan was to go shopping, but a big storm was brewing. By the time we were leaving the park, the lightening was getting pretty close. We had to run back to the bus. Al was taking lots of pictures so we could try to remember how beautiful it was, so we were the last ones on the bus. Sorry guys.

The same show is on in the lobby tonight - how exciting - my photographer is awake. YEAH!!! 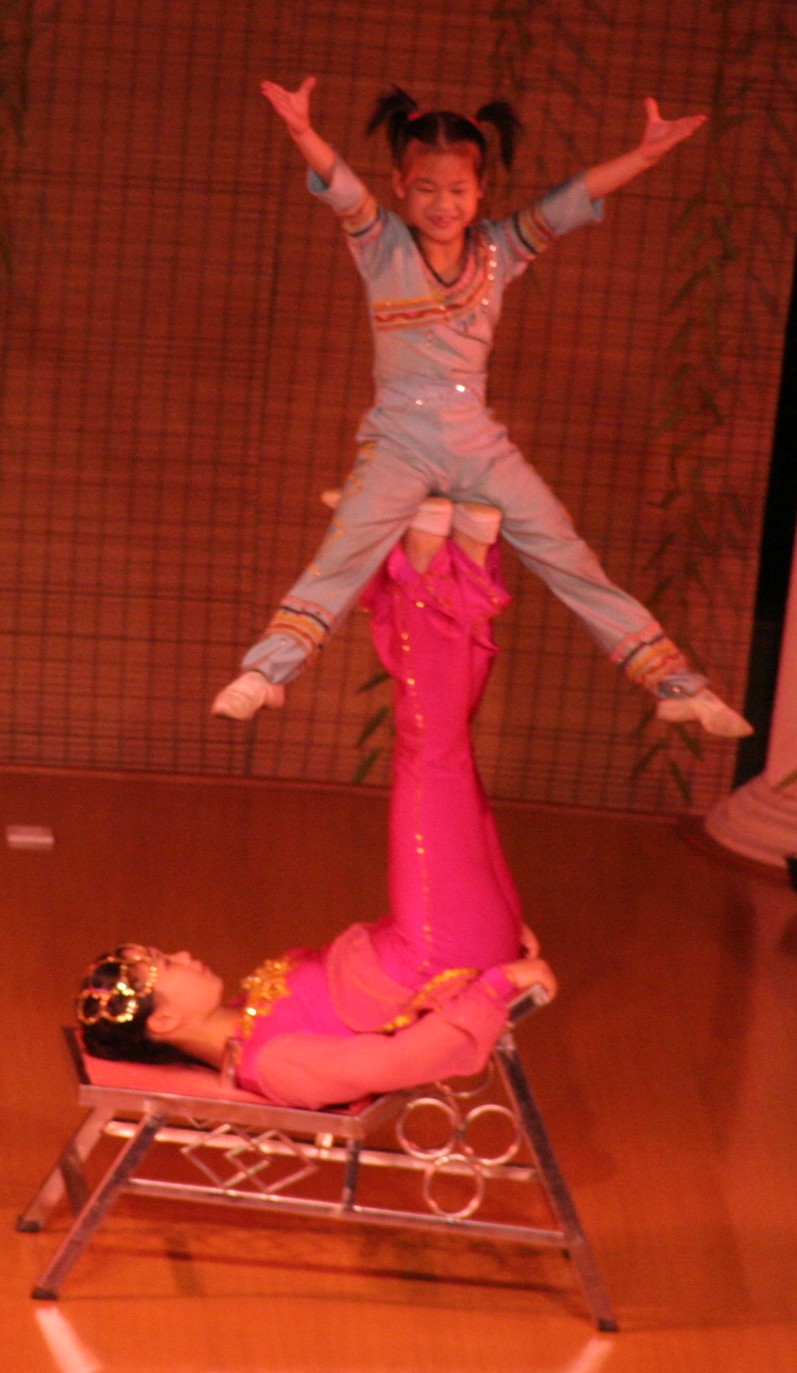 These girls were amazing!

She juggled her in straddles, twirled her around so fast that you could barely tell that she was a girl, she even did a triple. Then the excitement started. She did whip backs with her. One after another. This little girl, who appears to be about 6, has more back flexibility than anyone I've ever seen - sorry Chels. This entire act was quite impressive - my favorite. 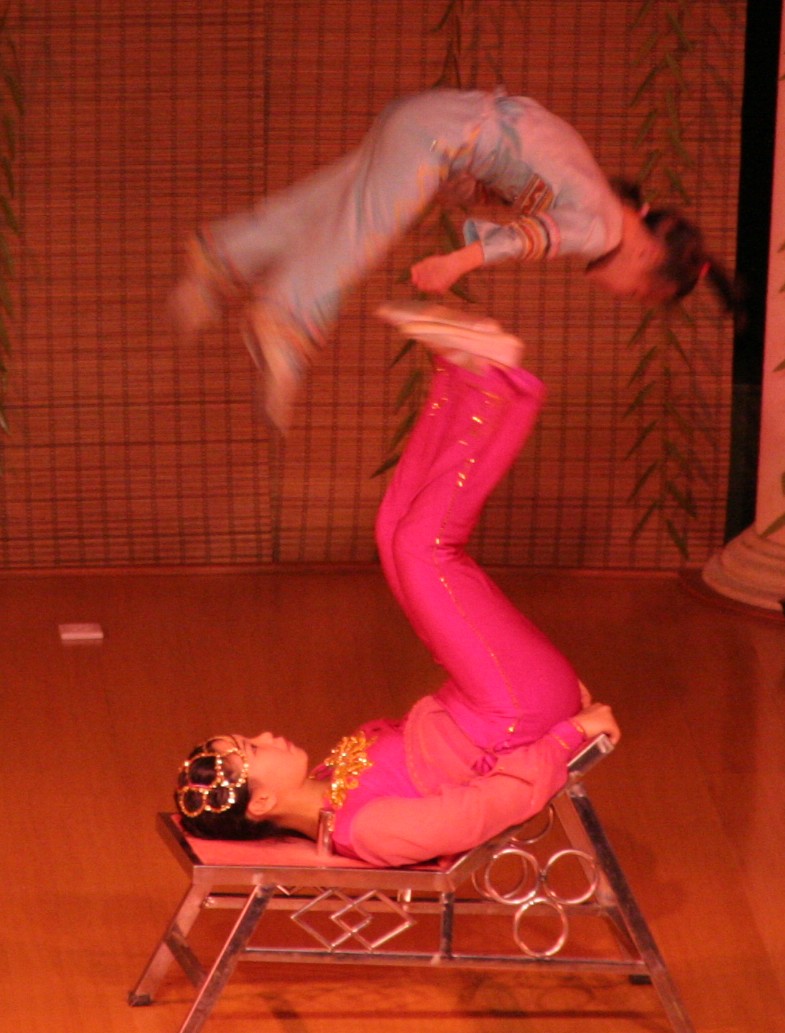 I'm happy that we got this new camera for the trip, but I wish we had learned how to use it. It's frustrating looking through all these blah pictures every day.

It's night-night time for everyone. Tomorrow we are going to a village and a museum. Maybe we'll be able to shop later. We leave Guilin at 6:30am Monday.